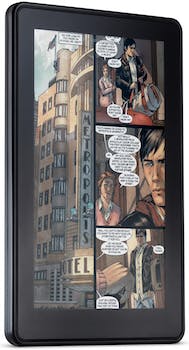 Duking it out over digital DC Comics rights

When DC Comics gave all the digital rights to Amazon, Barnes & Noble didn't take it laying down.

Barnes & Noble just raised the stakes in the arms-race for digital content.

Two weeks ago, DC Comics  announced that it is making 100 of its most popular comics available exclusively on the new Amazon Kindle Fire. This will be the first time most of these titles will be available digitally, DC said in a statement.

This weekend, Barnes & Noble retaliated by instructing stores to remove physical copies of DC comics from its shelves. In a written statement, the bookstore said it was following standard procedure for any publisher that refused to make its work available over the Nook Color, Barnes & Noble’s e-reader.

“Regardless of the publisher, we will not stock physical books in our stores if we are not offered the available digital format,” wrote Jaime Carey, the company’s chief merchant.

The conflict has Neil Gaiman, the author of several of the DC titles moving to Kindle Fire exclusivity, weighing in on his blog. Gaiman said he doesn’t think the bookstore chain’s “obvious” motive to intimidate other publishers will pay off in the long run.

“Barnes and Noble’s position as the US’s sole huge bricks and mortar shop chain is something that it’s very easy to abuse,” he wrote. “I hope that this is a negotiating tactic, because otherwise it does bad things for customer choice all around, digitally and otherwise.”

Customer choice, however, seems to side with whichever stores continue to sell comics. Comic books, some customers argue, are already hard to find without publishers making deals.

“The B&N thing just shows we should sell comics in every place possible. Stop all this exclusive stuff. Comics are TOO exclusive already,” tweeted @skottieyoung.

Other readers pointed out a silver lining — when the mega-chain pulled the comics, it opened up the market for local comic retailers.

“Thanks, B&N! You’re doing loads to help local comic shops. Keep it up and folks, buy your comics from a local shop!” tweeted @MegsLeigh.

“As a friendly reminder, these books will remain on the shelves of thousands of comic book stores nation-wide, and across the world,” wrote Christopher Butcher on Facebook. “I only mention this because comic book retailers have either been entirely excluded from digital comics downloads or treated to abhorrent terms in order to participate.”