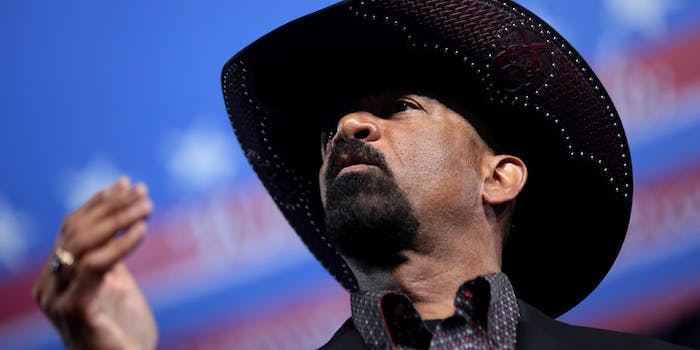 The passenger said he was detained by six officers and two dogs.

Milwaukee Sheriff David Clarke has become a controversial figure for his gung-ho support of gun ownership, his anti-immigrant stances, the four deaths that occurred in his jail in 2016, and his threats of violence.

But when he had a verbal exchange with a fellow airline passenger in January, Clarke allegedly turned to his underlings for help in detaining and questioning the man.

According to the Milwaukee Journal Sentinel, Clarke sent a text message to Captain Mark Witek that detailed what should be done when passenger Dan Black walked off the plane.

“Just a field interview, no arrest unless he become(s) an asshole with your guys,” Clarke allegedly wrote. “Question for him is why he said anything to me. Why didn’t he just keep his mouth shut? …

“Follow him to baggage and out the door. You can escort me to carousel after I point him out.”

Black is suing Clarke and Milwaukee County for what he says was an unlawful stop and arrest, which he said violated his constitutional right to equal protection and the right not to be unreasonably searched.

The incident occurred in January when Black and Clarke were on the same flight from Dallas to Milwaukee. Black asked Clarke if he was the sheriff, and after Clarke confirmed it, Black said he shook his head. Clarke asked if he had a problem. Black claims he said no and said he then moved on to his seat.

According to Clarke’s attorneys, Black stood over Clarke on the plane and, “in a physically threatening manner, stared at Clarke and shook his head at him for a prolonged period of time.” Clarke said Black didn’t answer him when he asked if Black had a problem.

After he got off the plane, Black said he was met by six Milwaukee officers and two dogs, and he was detained and questioned for about 15 minutes.

“There was absolutely no basis for this incident, and I believe I was the victim of the sheriff’s abuse of power,” he wrote in his initial complaint, via HuffPost.

In response, the Milwaukee County Sheriff’s Office posted this on Facebook.

Sheriff Clarke regrets that he cannot attend this juvenile, leftist, anti-cop tantrum. He is pleased that he has their…

The office also released a statement by Clarke, which read, “Next time he or anyone else pulls this stunt on a plane they may get knocked out. The Sheriff said he does not have to wait for some goof to assault him. He reserves the reasonable right to pre-empt a possible assault.”

Clarke, wearer of ridiculously memeable T-shirts, said earlier this month that he had joined the Trump administration in the Department of Homeland Security, but officials have not confirmed that.

Auditors from Milwaukee County are investigating whether Clarke abused county resources during the January incident, but he reportedly has refused to cooperate, saying it’s a “fake investigation.”