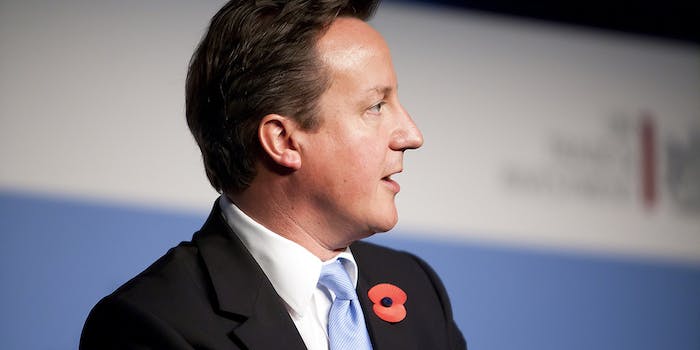 Even the Zimbabwean tyrant Robert Mugabe had more followers.

Out of the 129,000 people who follow the Conservative leader, it appears thousands are bought, according to the Mail on Sunday. The prime minister raised suspicions when he doubled the number of fans in just under a month.

To put this into perspective with his fellow world leaders, Barack Obama is has about 39 million Facebook likes. French president Francois Hollande, said to be his country’s most unpopular leader since World War II, has amassed 440,000 fans. Even the Zimbabwean tyrant Robert Mugabe was more popular than Cameron: He had just under 128,000 followers.

It isn’t hard to see why the Conservative party spent thousands on the paid adverts to convince people to like their leader. David Cameron’s party trails Labour in every opinion poll. On Facebook, whose users tend to be younger and more liberal than the voting population—and therefore a key demographic the Tories need to win over—Cameron also trailed Nick Clegg, deputy prime minister and leader of the Liberal Democrats, in likes.

That was until Conservative bosses decided to give their Eton-educated leader another helping hand up the social ladder, which party bosses insist is totally “above board,” pointing out that U.S. presidential candidates also do it.

“It looks like David Cameron is buying popularity,” said Labour MP Sheila Gilmore. “There is no end to his ego, paying for Facebook friends.”

Labour leader Ed Miliband trails both Cameron and Clegg with slightly more than 33,000 Facebook likes. He is also lagging behind Cameron on Twitter, with less than half the number of followers. Even more worrying for the Labour leader and his campaign, just 795 people are “talking about this”—actively engaging with his page—whereas Cameron has roused 48,000 of his followers.

This is still, of course, another embarrassment for the prime minister, who was recently mocked by celebrities such as Patrick Stewart for posting a selfie of his phone call to Barack Obama. Cameron then showed how sensitive he is to mockery by responding to Stewart with another show-off picture of himself, this time with president Bill Clinton.