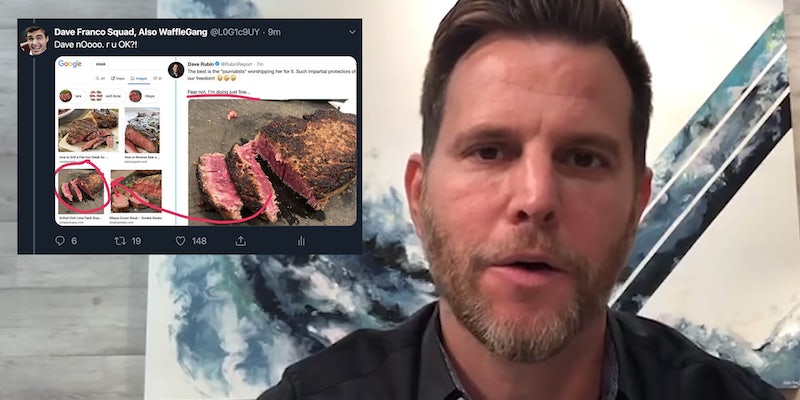 Call it a deep steak fake.

Yesterday, Dave Rubin celebrated getting unequivocally owned by Rep. Alexandria Ocasio-Cortez (D-N.Y.) by tucking into a big hunk of meat.

Spotting the tweet, @L0G1c9UY did a quick photoshop to make it look like Rubin used Google images to fake eating a steak.

L0G1c9UY told the Daily Dot via private message that he didn’t expect the tweet to go viral. Yet within nine minutes, it had 150 likes and was getting retweeted by large accounts, including some members of the media. Realizing it was getting out of hand, he did the responsible thing and took it down.

“I was going for harmless prank with my friends, expecting to get maybe a few hundred likes and we’d have a laugh,” L0G1c9UY said. “I didn’t intend to do a media hoax so I put the brakes on it and let everyone know it was a fake.”

Alas, it was too late. The damage, if you can call it that, was done. Pretty soon the hoax found its way into Rubin’s timeline when a Google employee shared it.

Shockingly a quick scan of his twitter shows he’s also a progressive activist.

For his defense, Rubin posted an after picture of his empty plate, which definitely isn’t the saddest thing ever.

Switching to offense, he attacked Michael Sayman, the Google employee who had screengrabbed the image and tweeted it. Rubin even tagged Google in four follow-up tweets. L0G1c9UY, who asked to remain anonymous because of Rubin’s attacks on Sayman, said that the two don’t know each other.

“He’s just one of many innocent people who got taken in by my prank,” he said. “He seems like a good guy.”

Then Rubin tattled to @Jack, as people with extremely thick skins are wont to do.

Sayman quickly responded to Rubin that he’d thought the hoax was real and deleted his tweet as soon as he realized it wasn’t. Dissatisfied and potentially experiencing meat sweats, Rubin demanded an explanation of how Twitter works.

Dude, if that’s the case you grabbed a pic from a random anonymous YouTube person and passed it as your own. You’re a @Google employee. Do you follow that person? How’d it come across your radar. Let’s do this man!

And thus, #steakgate was born. On one side: people laughing about some dude flipping out about false claim that he didn’t eat a steak. On the other: his buddies and fans defending his meat-eating honor.

Hey @michaelsayman, I see you deleted your tweet already. Why are you photoshopping Google search results?

Wonder if any “journalists” will get on this? A @Google employee photoshopping search results seems like a problem…@Timcast https://t.co/Ud1jQiGbl0

So anonymous account which spreads lies all day long which get shared by progressive activists (and Google employees), deleted this tweet. Curious, @jack, got a policy on these accounts? It’s your company and you can do what you want.

dave rubin is trying to get someone banned for saying he didn’t really eat steak https://t.co/dizDM1HbDu

steak is seriously business, especially on the internet you can't lie there

Dave Rubin melting down about his steak photo after getting pummeled by AOC is really something: https://t.co/npN1sEDdii

It looks like he posted a fake image to attack Dave. pic.twitter.com/XSpUI4tixR

Funny thing is that he’s demonstrating you have the integrity to delete your joke tweet because you’re worried about people thinking it’s real.

I await the day Rubin & his ilk deign to take a similar approach to the spurious nonsense they push.

Dave Rubin hates cancel culture, Dave Rubin hates getting people fired over nothing, Dave Rubin cries all day and night over what happened to James Damore – which is why Dave Rubin is calling out a Google employee and tagging his employer because he trolled him with a steak photo pic.twitter.com/hFT0jn8WSz

There's a white slice in the stone too on the first image… Don't see it anymore.

Did Rubin present the stake on one and then eat it on a second? Doubt (X) pic.twitter.com/iY59pVeTlV

Not to be cowed by the extremely simple explanation of how a harmless prank tweet spread across Twitter, Rubin kept going back for more and more and more. Finally satiated, he tweeted a picture of his desert: a single peanut butter cup, which he definitely didn’t get from Google images.

even your dog doesn’t wanna look at you

L0G1c9UY characterized the blowup as classic Rubin. “Get mad, play the victim, struggle futilely to come up with a joke and then concoct a conspiracy for good measure,” he said.