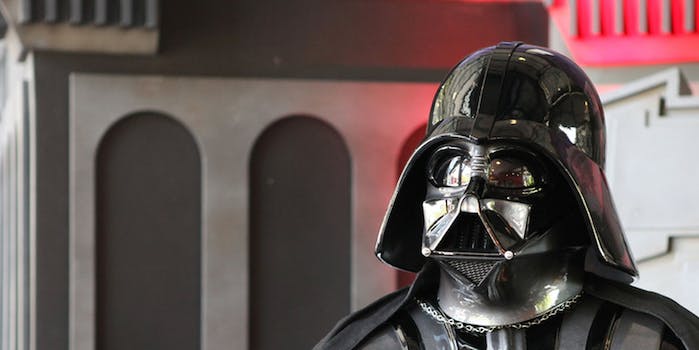 Darth Vader is running for president of Ukraine

The borscht is strong with this one.

Apparently discontent with his subordinate position in the Galactic Empire, the powerful Sith lord known as Darth Vader has trained his pitiless gaze on planet Earth, and a specific region, no less.

He just declared his intention to campaign for the presidency of Ukraine.

Radio Svoboda reports that Vader already holds a position as chairman of the Internet Party of Ukraine, first established in 2007, and has filed the necessary paperwork with the country’s Central Election Commission to appear on the ballot in a special election to be held on May 25. He’s also made the required and hefty financial deposit of 2.5 million Ukrainian hryvnia ($225,225), which suggests this is more than an irreverent prank.

If we had to guess, we’d say this was a scathing comment on the imperialist intentions of Vladimir Putin’s Russia in the Crimean peninsula. But in watching Russia Today’s video of Vader announcing his candidacy to standing applause, you have to wonder if it’s not a full-blooded political revolution. Still, he may want a mask that covers his chin.

In some sense, the truly shocking news here is the surprise Chewbacca endorsement.

Update: Terrible news for fans of democracy everywhere—it’s now being reported that Ukrainian authorities will not allow Darth Vader to run for president. On the plus side, looks like he’s still doing campaign events.

Ukraine has ruled that ‘Darth Vader’ cannot run for president. Here he is buying meat in a Kiev market today pic.twitter.com/HJUQd8Ulp4

How to sum up our devastation? Oh, right.