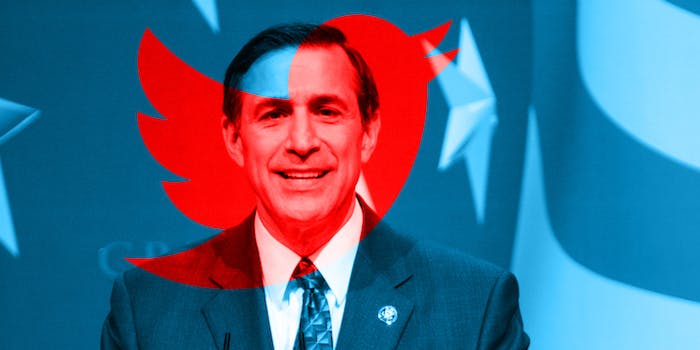 Congressman tricked into retweeting photos of Nazis and war criminals

This did not go as planned.

Congressman Darrell Issa (R-Calif.), known for being an annoyance to President Obama and his Twitter followers alike, just can’t seem to stop retweeting his followers’ photos of Nazis and murderers.

On Friday evening, Issa performed a Twitter stunt he had done before: retweeting people’s pictures of their family members who had served in the military. But this time, pranksters got involved.

One user, Neil, tweeted Issa a photo of a group of American snipers in Afghanistan, saying his “bro” was pictured. Issa was apparently unaware that the photo was of the highly criticized 3rd Battalion 5th Marines, which bizarrely adopted a Nazi “SS” flag, claiming it stood for “Scout Sniper.”

@DarrellIssa my bro in the 1st Recon Bn., keeping our troops in Afghanistan safe in 2010 pic.twitter.com/feZfRGQ8mq

Another, Go-Gurt Darfur, posted a photo of his “Uncle Lee”—Lee Harvey Oswald, the former Marine believed to have assassinated President John F. Kennedy.

Finally, @Butt_C_Planet showed a picture of his “late grandfather,” but it was actually a photo of Nazi Heinrich Himmler, one of the principal architects of the Holocaust.

But thanks to the ever-vigilant Politiwhoops.com, which automatically tracks every official congressional account’s deleted tweets, Issa’s mistakes have been screengrabbed for all to see.

As of this writing, however, Issa’s staff had yet to un-retweet Uncle Dad’s picture of “dad,” who’s actually William Calley, the Army officer found guilty of murdering 22 Vietnamese civilians.

Issa, who previously earned the Internet’s goodwill with his opposition to the Stop Online Piracy Act (SOPA), has since annoyed his Twitter followers with stunts like tweeting the entire Constitution, which took more than 400 tweets and cost him more than 400 followers.