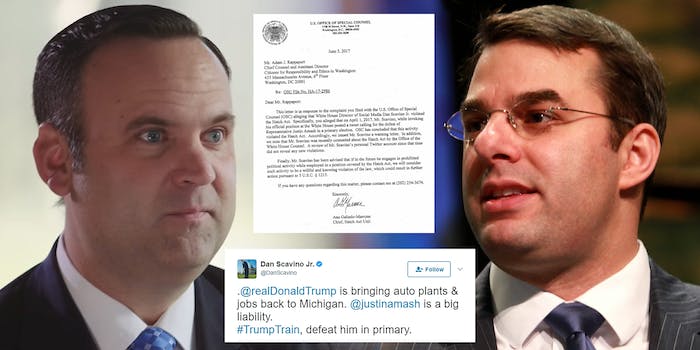 The Office of Special Counsel issued a letter to Scavino warning him of his violation in response to an April 1 tweet where he called on the “#TrumpTrain” to help defeat  Rep. Justin Mash of Michigan, a Republican member of Congress who had been critical of President Donald Trump.

The Hatch Act, passed in 1939, was an attempt to eliminate political coercion in the federal government by preventing employees from engaging in certain “political activities.”

The letter, dated June 5, says specifically that Scavino violated the Hatch Act and advised him that the letter served as a warning.

“Mr. Scavino has been advised that if in the future he engages in prohibited political activity while employed in a position covered by the Hatch Act, we will consider such activity to be a willful and knowing violation of the law, which could result in further action,” the letter reads.

The U.S. Office of Special Counsel has concluded that this tweet from @DanScavino / @Scavino45 about @justinamash “violated the Hatch Act.” pic.twitter.com/QzSuOPnK2w

Scavino’s full tweet on April said: “@realDonaldTrump is bringing auto plants & jobs back to Michigan. @justinamash is a big liability. #TrumpTrain, defeat him in primary.”

Federal employee who willfully violate the Hatch Act can be barred from being employed by the government for up to five years, according to the Washington Post.

Scavino was criticized online in May after he tweeted a screenshot from Hillary Clinton’s aide Huma Abedin’s concession call to then-Trump campaign manager Kellyanne Conway on election night.

Scavino said he had the call on video and would share it “in the near future.” It has not been posted.