Late Thursday night, during the melee and confusion that followed shootings at a Dallas protest against police brutality, police tweeted a photo of a suspect.

Within minutes, the photo blanketed the internet. It was everywhere.

There’s just one problem: Mark Hughes, the man in the photo, wasn’t one of the snipers that shot at police officers that night. And on Friday morning, after Hughes had turned himself in to be interrogated by police and was cleared and set free, law enforcement had yet to set the record straight. A tweet sent at 12:52am remains on the Dallas police Twitter account. 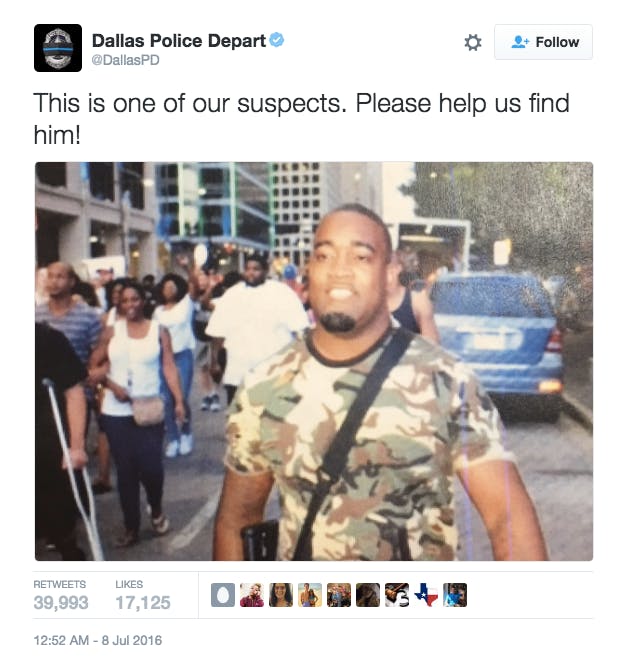 Speaking to CBS News, Hughes explained that he had been trying to get to his car during the protest but couldn’t because of road blocks. He said he had no idea that his photo was being widely circulated as a suspect.

“We received a phone call that my face was on there as a suspect,” said Hughes in a thick Southern drawl, “And immediately I flagged down a police officer.”

Hughes’s brother Cory told CBS News that the two activists were “part of the organization that put on this peaceful protest,” and that as soon as the shooting began, they went to police and asked how they could help. When they first heard shots, Cory said, they approached police to hand over Mark’s gun so there wouldn’t be any confusion—and so that no one would shoot at him by mistake.

Video footage shows police taking the rifle without a fuss (Texas open-carry laws allow anyone to walk around with a gun), handing Hughes a receipt of sorts.

“What I’m bothered by is that my brother easily could have been killed,” Cory Hughes said, “Because somebody that was irresponsible identified him as a suspect. Not as a person of interest, but as a suspect.”

Mark Hughes told CBS News that he had just been released from an interrogation room. But even though his name had been cleared with the police, he was afraid to look at social media—his brother Cory had already been inundated with death threats “from people all over the world.”

“I’m not satisfied with an apology,” said Hughes, adding that he was “absolutely” concerned with his safety.

“God forbid, you have four dead cops out there, and you may have two dead civilians because people think we had something to do with it,” Cory Hughes said.

“You’ve already cleared our names within the department,” Cory Hughes said of Dallas police, “But are you gonna clear our names out here in this world? Because we gotta go out here… there are extremists out here like that, and we don’t know what’s gonna happen to us.”