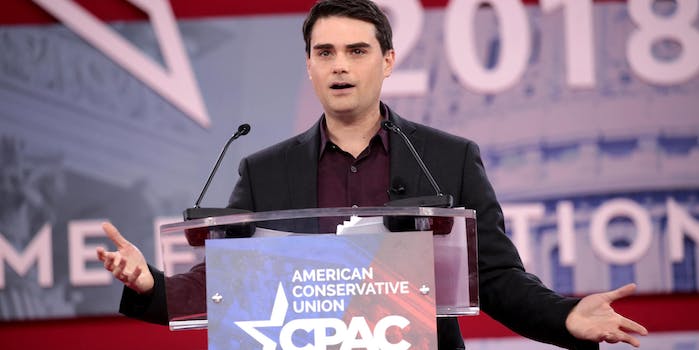 How Ben Shapiro’s site, the Daily Wire, is gaming Facebook

It runs a "clandestine network" of pages to promote content.

In a remarkably short time, the Daily Wire has become a far-right content juggernaut. Its two million Facebook followers place it in the realm of top publishers on the site.

But one of the secrets to the Daily Wire’s success: Move fast and break Facebook’s rules. (The others include millions of dollars from extremist conservative billionaires and bias confirmation mixed with libel.)

An investigation by Popular Information revealed that the Daily Wire uses “a clandestine network of 14 large Facebook pages” to promote its content. The pages purport to be independent and do not identify themselves as affiliated with the Daily Wire.

The Daily Wire did not respond to Popular Info’s requests for comment.

Cumulatively, the 14 pages have eight million followers. This explains how the Daily Wire, in spite of having an eighth the followers of the New York Times, manages to blow the Times’ Facebook engagement per story out of the water. It also beats the Washington Post, HuffPost, and other top publishers.

In fact, the 14 pages drive roughly four times as much traffic to the Daily Wire as its main page does, Popular Info notes.

So what is Facebook planning to do about it? Nothing. A representative from the company told Popular Info that although the pages were engaging in deceptive behavior, it wasn’t going to do anything about it.

Facebook’s community standards define coordinated inauthentic behavior as “the use of multiple Facebook or Instagram assets, working in concert to engage in Inauthentic Behavior […], where the use of fake accounts is central to the operation.”

Inauthentic behavior is done to deceive people about who or what the page represents, the popularity or source of the content, etc.

Facebook has used this rule to ban pages in the past. Last year, it deleted left-wing activist Chris Metcalf’s seven-page network that had a cumulative 1.8 million followers, Popular Info reports.

The only difference between Metcalf and the Daily Wire’s networks is political. Metcalf is a progressive liberal. Daily Wire is run by conservative wunderkind Ben Shapiro.

Perhaps Shapiro and Mark Zuckerberg will discuss this the next time they have dinner.