I built a robot at Dadaconf, a hackathon that encourages failure

The Bay Area event that combines art with tech.

It smelled like rain and asphalt, paint and metal, and I kept my coat on all day to prevent the concrete chill from seeping into my body. Being bundled up made it a bit difficult to assemble a cardboard robot, but eventually I made one that could move and even dance. It was an odd creation that perfectly embodied the silly and experimental idea of “Big Dada.”

My robot was born at Dadaconf, an unusual hackathon hosted at the place where Burning Man sculptures are born and later die. It’s called NIMBY, and it’s Oakland’s warehouse of oddities and art projects, with giant rooms and a dusty outdoor area which house hollowed out cars and enormous human-like statues. There’s also a coffin-turned-barbecue, and plenty of old metal signage haphazardly stacked between crates, tools, and wires.

NIMBY is home to makers, hackers, and artists, and provides collaborative space to individuals wanting to build things or host events in the 70,000 square foot space. Dadaconf took over bits of that space for its recent event, inviting people, mostly in the tech industry, to make weird art. 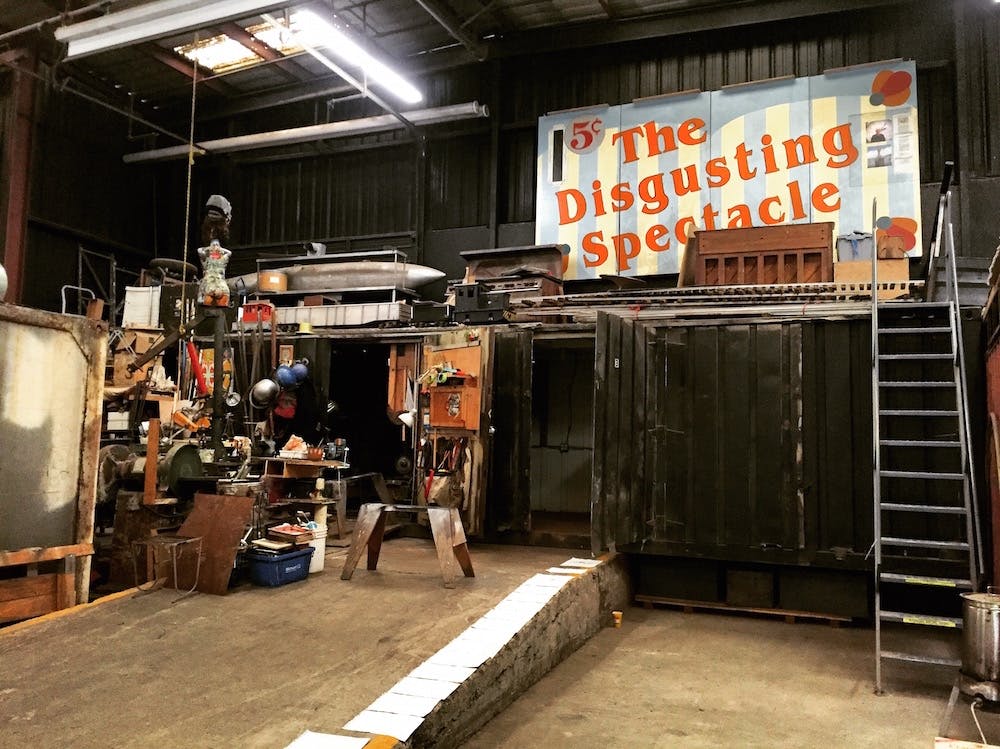 Unlike traditional hackathons where programmers build minimum viable products and pitch to judges while stressed and sleep-deprived, Dadaconf bucks the idea of making something purposeful and instead encourages participants to create the absurd.

It’s based on the idea of “Dada,” an early 1900s art movement created in reaction to World War I. The generally nonsensical art mocked materialism and fine art, and criticized the war. “Big Dada,” is a play on both the cultural aspect of Dada, and the popular, malleable term “big data.”

Founders Siegfried Bilstein and Joey Yang want those who participate to fail or, at the very least, to not be afraid of failing; to be creative without worrying how good something is, and just make art for the sake of making it. The duo started Dadaconf as a way to get people engaged with ideas and work outside of the daily grind. Both are engineers in Silicon Valley; Bilstein works at LinkedIn, and Yang is from Google.

The inaugural Dadaconf kicked off last year at a retreat in Tahoe. This year, Bilstein and Yang wanted to make it more accessible and affordable to makers, and found NIMBY, a space which already marries technology and art, to be the perfect fit for the second, much bigger event.

“You shouldn’t view technology in opposition to art, they’re both related. Whether it’s using your computer or building a guitar, we view technology and art as the same sides of the world,” Bilstein said in an interview with the Daily Dot. He spent the afternoon on Saturday making a guitar out of small pieces of wood. “That’s the thesis of this. You have to learn something to be creative. The first step to getting good at something is sucking at it, and that’s okay.”

It’s very easy to avoid doing things you have no experience with. The moment I stepped into the shipping container housing the robotics workshop, inviting attendees to make bots out of cardboard, Arduino, and servo motors, I realized I was intensely out of my depth. Instead of being inspired, I was initially completely intimidated by the circuitry, boxes, and zip ties that covered the tables. 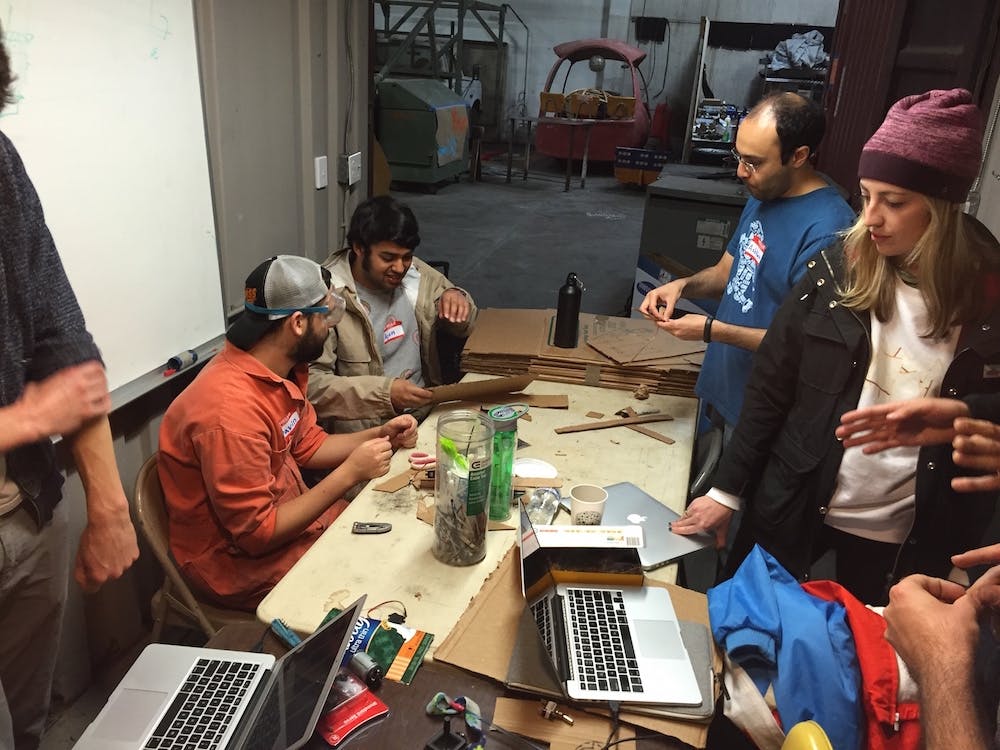 It wasn’t long before Jen Tong convinced me to make one, too. Tong is a developer advocate at Google and an avid robotics hobbyist. She helped attendees create cardboard robots programmed in JavaScript with limited materials, encouraging us to make them as ridiculous as possible. I fumbled around with a small rectangular piece, shaping it into a semi-circle and creating something that looked like a boat.

“What attracts me to Dadaconf overall is that people are less afraid to fail here than a lot of other parts of life,” she said. “They’ve done a good job at creating an environment where people feel free to experiment. The expectation that everything we create will be a little bit terrible makes people less afraid to explore new things.”

The robotics class was fairly technical, but other classes included improv comedy, cross-stitching, painting, submerging random stuff in cement, a speaking session on connected cities, and charades. Workshops like creating art through neural networks, turning music into VR content, and programming digital music through a variety of coding libraries did require some prior familiarity with the tech. (Bilstein and Yang also invited me to read a piece of original science fiction, which is my own creative outlet.)

Dadaconf is meant to shatter the idea that people aren’t creative. By providing a space that welcomes failure and encourages experimentation, trying new things doesn’t have to be daunting, and no one expects perfection.

“At work, people will tell me ‘I’m just not a creative person,’” Bilstein said. “Everyone is creative. You can’t be alive if you’re not creative, you have to adjust to things all the time. We just want to bring that out.”

The conference also aims to challenge the narrative of techies-versus-everyone-else in the Bay Area. The San Francisco Bay Area is flush with people who move to the city for tech money, renting one bedroom apartments for $3,500 per month. But the communities face significant income inequality and a lack of affordable housing, which has created animosity towards the industry.

In San Francisco, you see graffiti advocating “Die techie scum,” and threats posted on street corners telling Twitter, Airbnb, and Uber employees to “get off the block.” The brogrammer stereotype is unwanted, and an almost tangible culture rift can be felt within the city.

At Dadaconf, those stereotypes don’t exist. Everyone made something for the sake of making it, trying new things, and literally sticking their hands in cement to see what happens. The creative expression that people may struggle to exercise exploded all over the floor at NIMBY. 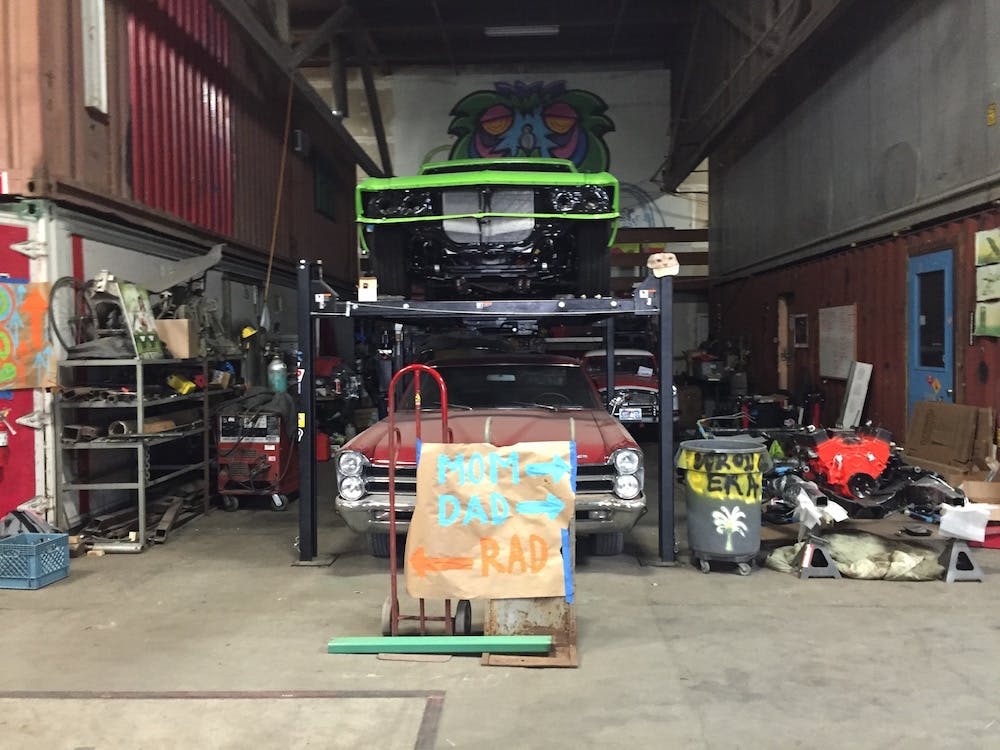 “Part of it was trying to blur these lines a little bit,” Bilstein said. “I think less so now, but the Bay Area felt so divided when I landed here [3 years ago], and you’re either on this money train or you’re not. That’s not the way it should be. It’s meant to be really lighthearted. It’s not a protest movement. Anyone who wants to come here should come here.”

It’s hard to feel comfortable failing on your own. But throw yourself in a conference fundamentally built to lay waste to the ideas of structure and perfection while embracing the absurd, and suddenly failure is simply just learning.