A group of hackers aligning themselves with the Islamic State assumed control of French Global TV network, its website, and social media accounts late Wednesday and into Thursday, according to the Associated Press.

Like something out of an Alan Moore graphic novel, the attack blacked out 11 channels of TV5Monde and hijacked the network’s website, broadcasting a static high-contrast image of a face covered by a turban, evoking imagery of a beheading video, with the name CyberCaliphate written across the top and the message “I am ISIS” in bold letters, playing on the letters IS in the French, “Je suIS IS.” 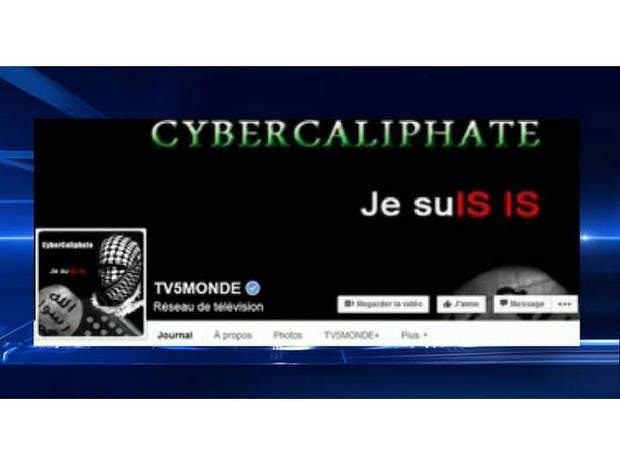 During a press conference, France’s Interior Minister Bernard Cazeneuve said French authorities are considering the attack a terrorist act and are “absolutely determined to catch those who want to strike at the heart of our Republic.” According to Cazeneuve, French counterterrorism investigators are looking into the hackers’ claim that they are affiliated with the Islamic State.

Sort of the IS version of Anonymous, CyberCaliphate is responsible for several attacks against Western targets in recent months. In January, the group hijacked Newsweek’s Twitter account and, along with vague threats to Michelle Obama, tweeted, “While the US and its satellites are killing our brothers in Syria, Iraq and Afghanistan we are destroying your national cybersecurity system from inside.” The word “caliphate” literally means an Islamic state. A “caliph” is a religious or political leader considered a successor to the prophet Muhammad, absolute in his power and authority over his dominion (or caliphate).

But while the group claims affiliation, expresses pro-ISIS sentiments, and incorporates the IS imagery in all of its attacks, at this point it remains unclear whether CyberCaliphate is linked to IS in more than ideology—whether it is the digital arm of ISIS or simply a politically sympathetic sect seeking to support the Islamic State’s agenda remains undetermined.

In January, Motherboard reported a contact with an unconfirmed identity who it believed to be Junaid Hussain, an infamous British Hacker and purportedly active ISIS recruit. He denied CyberCaliphate’s direct affiliation with ISIS and claimed the outfit is an “independent hacking group that supports the state.”

With France still reeling from the recent bombing of the headquarters of satirical newspaper Charlie Hedbo by extremists enraged at the publication’s depiction of the prophet Muhammad, the black screens blocking their broadcasts understandably unnerved Yves Bigot, the station’s director.

“When we discovered the meaning of the message appearing on our social media and our websites, it both allowed us to understand what was happening and obviously worried us,” Bigot said.

In an interview with Motherboard, cybersecurity expert Peter W. Singer suggested CyberCaliphate may be pranksters, saying they “might be sympathizers or they might just be people who do these kinds of things for the lulz.” But one thing is certain in light of the scope of this most recent attack—assuming control of global television broadcasts and knocking a network off the air represents a new and threatening level of sophistication for CyberCaliphate, one which should shock authorities into taking the group seriously regardless of its affiliation to the Islamic State.