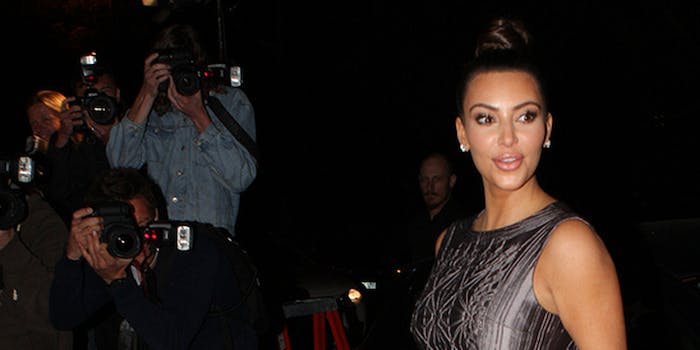 Soon there will be more cryptocurrencies than people who know how to use them, and the latest entry demonstrates just how far afield developers must go to give new brands the buzz they need to thrive. I’m talking, of course, about Kim Coindashian, named for the indefatigably famous Kim Kardashian, reality TV star and red carpet fixture. Alternately known as Kimcoin—and, before a graphics correction, “Kim Koindashian”—the currency has not yet officially launched. Even so, its engineers are not above calling out their competition. “This will be a fair launch, meaning no premining,” the website notes, adding, “Looking at the guys over [at] Coinye West with that one.”

The Coindashian crew would do well to modify Coinye’s strategy in more ways than one: the Kanye West-themed virtual currency tried to find a loophole when its namesake threatened legal action, then collapsed entirely under the mounting pressure. Perhaps that’s why the folks over at AllCrypt, who rank the popularity of any given coin in relation to all the others, were annoyed at Kimcoin’s attempt to get a slot on their master list.

This sort of controversy, however, may be exactly what Kim Coindashian’s anonymous creator—and his two likewise nameless collaborators—are after. “I have a different startup of my own that I’m doing,” the mystery entrepreneur told the Daily Dot via email. “This is just something on the side for fun.” If anything, it’s designed to stir up trouble:

Really, what motivated it was the crazy response by Kanye West over the whole Coinye fiasco. I thought it was way overblown, but it went as far as the WSJ covering it. After that happened I thought really hard about how to create another coin that would be able to generate a similar amount of press, and I came to the name Coindashian when talking about it with some friends. It seemed perfect because Kanye is very protective of his wife, just got dealing dealing with Coinye, and so starting one with his wife seemed like the ultimate place to go.

The group believes that “there is a tremendous opportunity here” to bring cryptocurrencies into the mainstream, the developer said. “I’m sure that as soon as this catches any wind that cease and desist letters/lawsuits will start coming,” he added, “but it’s fun to create something like this, even if I can’t publicly say I’m behind it.” Well, until the subpoena comes through, at least.

Today is The Day We Fight back, said @kanyewest about Kim Coindashian. Sorry though because #ItsOurTime