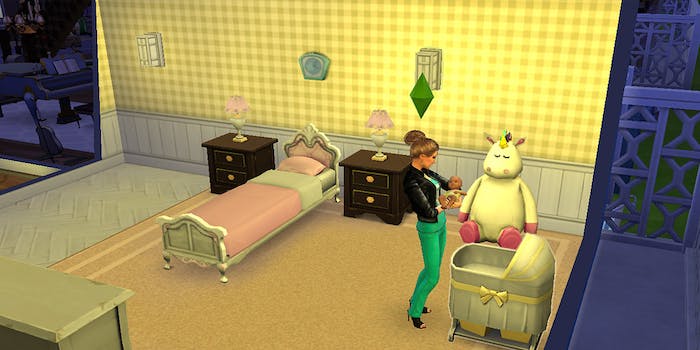 Numerous bugs are making their children unable to eat or bathe.

A glitch in the popular video game The Sims 4 is causing players to have their children taken away from them.

Players are reporting that numerous bugs are making their children unable to eat or bathe, leading the game to act as a virtual social worker and remove the kids from the seemingly abusive home.

Among the problems, players say that items such as toys and tablets are becoming stuck to their children, while others just outright refuse to eat or sleep.

“When they try to go to sleep, they lay down then get right back up,” one player said, according to Polygon. “When they try to potty they sit down and stand up. When the parent tries to bathe them, the parent basically dunks them in the tub then back out.”

Players are taking to social media to decry the problem, which has apparently been ongoing for weeks.

Only just started the Sims 4 and already had my toddler taken off me because it wouldn't eat the animal crackers I gave it even though they were starving. Stress.

One player, frustrated with the issue, appeared ready to have her “big dumb idiot clown” child seized by social services.

While some players have been able to find temporary workarounds, most virtual parents just want the game’s developers to fix the bugs.

“As I mainly play toddlers this is making gameplay unenjoyable,” another player wrote in an online forum. “I hope that there is a patch for this problem soon.”

Until the bugs get fixed, players may have to forego having children or face the risk of being labeled a neglectful parent.