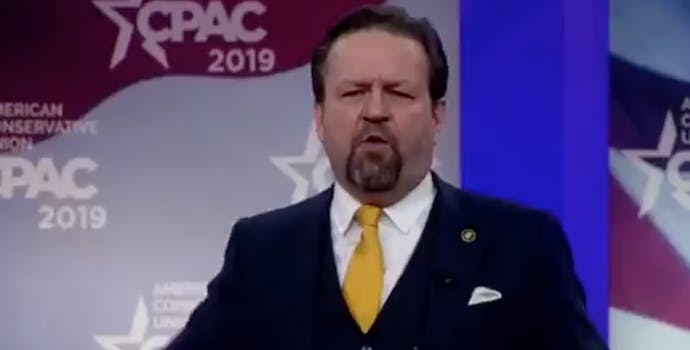 'They're trying to get rid of all the cows.'

Thursday marked the beginning of the Conservative Political Action Conference (CPAC), where the greatest minds in right-leaning circles join to outline their hopes, goals, and dreams of conservatism in the coming year. And all they could talk about were hamburgers.

More specifically, GOP leaders discussed how they are the only thing stopping beef patties from disappearing from the planet.

The opening day of CPAC was focused on railing against the Green New Deal, the proposal by Rep. Alexandria Ocasio-Cortez (D-N.Y.) that aims to curb the effect of climate change in the coming decades. One of the proposals in the plan is to curb America’s reliance on factory farming because the output of methane from cows is damaging to the environment.

The idea behind it is not to take away Americans’ hamburgers but to build a more sustainable food system that is less harmful to the environment. But that’s not what the geniuses at CPAC had to say.

That was followed up by Dr. Sebastian Gorka, former aide to President Donald Trump, who compared Ocasio-Cortez to Stalin and said she wanted to eliminate hamburgers.

Sebastian Gorka claims Democrats want to “take away your hamburgers” at CPAC. These shameless grifters know the rubes who follow the modern GOP will believe absolutely anything. pic.twitter.com/gLnC9nmQkj

All this came after conservatives pushed a picture of Ocasio-Cortez’s chief of staff eating a hamburger.

Hi AOC, why is your Chief of Staff eating a hamburger? smh pic.twitter.com/sJanAC1Oz2

to be clear, this picture was only taken and sent to me because AOC told the country to eat less hamburgers and her COS is here eating a hamburger. Notice how she wasn’t confronted and forced to leave the restaurant like liberals have been doing to the GOP?

Conservatives thought it was a “gotcha” moment, despite the fact that nothing Ocasio-Cortez had said was centered on reducing emissions—not hamburgers.

"They want to take away your hamburgers. This is what Stalin dreamt about but never achieved…" – Sebastian Gorka at CPAC. pic.twitter.com/F0IaEGl9AF

There are still three more days of CPAC.