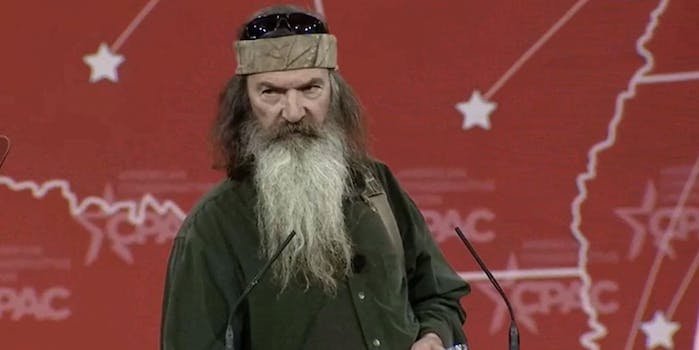 He once called Jesus a 'homophone' and now he's opening for Jeb Bush.

“It seems like, to me, a vagina—as a man—would be more desirable than a man’s anus,” Phil Robertson explained in his infamous 2013 GQ magazine interview.

For that pearl of wisdom and others like it, Robertson, star of A&E’s hit show Duck Dynasty, received the “Andrew Breitbart Defender of the First Amendment Award” on Friday at the 2015 Conservative Political Action Conference.

Robertson’s speech was followed by Former Florida Gov. Jeb Bush, who is considered by many a top candidate for the 2016 Republican presidential nomination.

The reality TV star was recognized at the annual conservative gathering for a litany of anti-gay remarks over the past few years; such as the time he went on Good Morning America and called Jesus Christ as a “homophone.”

“Women with women, men with men, they committed indecent acts with one another, and they received in themselves the due penalty for their perversions,” Robertson said in 2010 sermon. “They’re full of murder, envy, strife, hatred. They are insolent, arrogant, God-haters.”

The CPAC crowd—suspiciously devoid of any people of color—went wild as Robertson, who once implied that the Civil Rights Movement was a waste of time, took the stage. To applause and whistles and the waving of tri-cornered hats, he explained that “beatniks” and “hippies” were to blame for all the crowd’s problems.

“You lose your religion, according to John Adams, and there goes your morality. We’re almost there,” Robertson said his half-hour speech. “I hate to admit I got my facts from the CDC the day before yesterday, 110 million, 110 million Americans now have a sexually transmitted illness.”

He continued: “How many seconds does it take to get genital herpes? It said 30 seconds. I’m like, whoa, that’s pretty quick.” Robertson went on to say that the only form of safe sex is between “one man, one woman, married for life.”

Robertson considers himself somewhat of an expert on the topic of marriage. In 2009, he told a Georgia crowd: “You got to marry these girls when they are about 15 or 16. They’ll pick your ducks. You need to check with mom and dad about that, of course.”