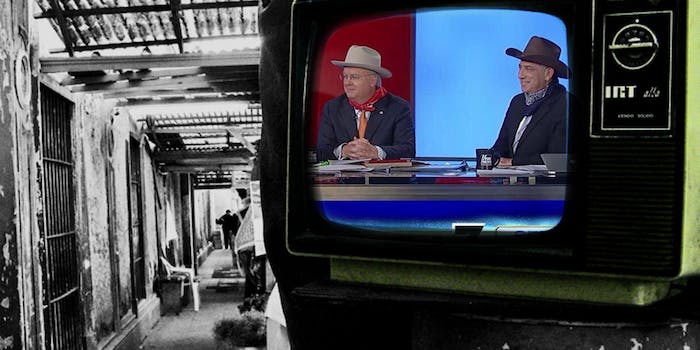 Fox has always been the Wild West of cable news, but this is getting out of hand.

Warning: This post contains an annoying autoplay video, embedded at the bottom, that we don’t know how to turn off. Sorry.

The happiest people in cable news during Tuesday night’s midterm election coverage were the folks at Fox News Channel. As the hours passed by, the Fox News set gradually became loopier and loopier, until finally Fox News panelists, including Republican strategist Karl Rove, donned cowboy outfits. Why, you ask? Do they really need a reason?

Everyone on Fox News is wearing cowboy hats. I’m not joking. Karl Rove. This is amazing. pic.twitter.com/tOM7oTHrjQ

It should go without saying that Politics Twitter, which by this point in the evening was thoroughly exhausted, seized on Rove and his posse for a stable of ornery jokes.

Cowboy Karl Rove message to the “courageous leaders” who told Latino’s not to vote this election cycle. #TNTweeters pic.twitter.com/HozwTCEIGZ

The undisputed Photoshop king, @darth, added his signature touch—although the original image was so crazy that at least one person suspected his hand in it from the start.

Others took it to the next level.

While some whipped out Photoshop, others had pointed barbs ready for this Republican ranger:

Why is everyone mad that Karl Rove wore a cowboy outfit? It suits him since his mind is stuck in the 1880’s.

You can watch these “campaign cowboys” in action in this video, courtesy of Breitbart:

Photo via Rodrigo Basaure/Flickr (CC BY 2.0) and screengrab via Fox News | Remix by Fernando Alfonso III