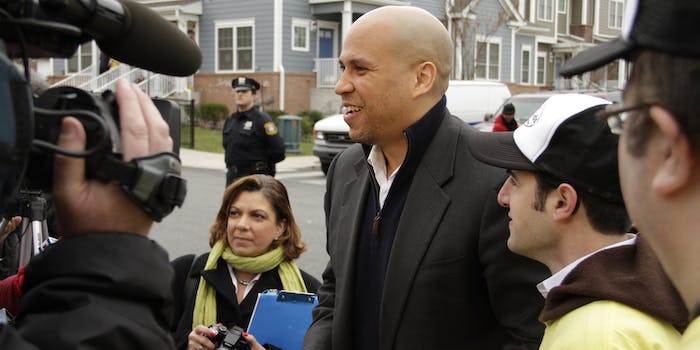 After finishing out deceased Sen. Frank Lautenberg's term, Booker will be on the ballot for a full term of his own in November 2014.

Attention Internet: One of your own is now a U.S. Senator.

Democrat Cory Booker, the beloved mayor of Newark, N.J., and a Twitter phenomenon, was just elected to the United States Senate. He beat Republican challenger Steve Lonegan in a special election to fill the seat held by New Jersey Democrat Frank Lautenberg, who passed away in June. Late last night, Reuters reported that Booker had a substantial 11-point lead in the polls over his opponent with over 90 percent of the votes counted.

Naturally, he tweeted his reaction to the election shortly after the results were tallied.

“It is not titles that honor, but people who honor titles.” Thank you New Jersey. I’ll work hard every day to honor your confidence in me.

Booker spent the day tweeting his thanks to voters who showed their support for him at the polls. It was all par for the course, as he is a constant Internet presence and notorious for going above and beyond the call of duty for his fellow New Jersey residents.

During Hurricane Sandy, he used Twitter to score free Hot Pockets for Newark residents displaced by the storm. In July 2012, he developed #waywire, a news site designed to appeal to millennials. He even paused his own Senate race to help rescue a trapped dog.

Booker, the first African-American from New Jersey to be elected to the Senate, has served as the mayor of Newark since 2006. Previously, he held a position on Newark’s city council. After finishing out Lautenberg’s term, he will be on the ballot for a full term of his own in November 2014.