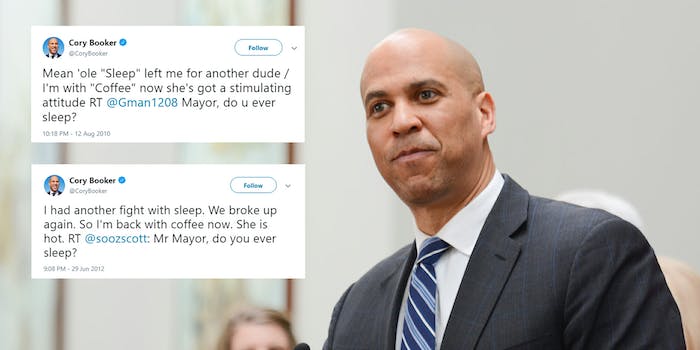 Sen. Cory Booker (D-N.J.), a 2020 Democratic presidential hopeful, apparently likes coffee, so much so that he’s tweeted the same joke about it numerous times in the past.

The New Jersey senator’s love for the caffeinated beverage was first spotted by writer Anna Fitzpatrick, who discovered that Booker—a long-time prolific Twitter user–had used a similar joke about being in a relationship with coffee in tweets as far back as 2009.

Booker does seem quite enamored with coffee. He’s described his hypothetical significant other as “hot,” “tall, delicious” and has joked that his relationship with coffee had caused “sleep” to separate from him.

The relationship seems to have been going on since his time as the mayor of Newark, New Jersey.

But as Fitzpatrick noted, the joke has come up numerous times in the past decade.

Perhaps the joke—which he’s posted roughly once per year—came up so much because his followers throughout the years have asked Booker if he ever slept.

I had another fight with sleep. We broke up again. So I'm back with coffee now. She is hot. RT @soozscott: Mr Mayor, do you ever sleep?

The latest coffee-relationship joke tweet from the senator was fairly recent.

In 2017, when asked yet again by a Twitter user about whether he got a lot of sleep, Booker went back to the joke, saying he appreciated coffee’s “warmth and stimulating company.”