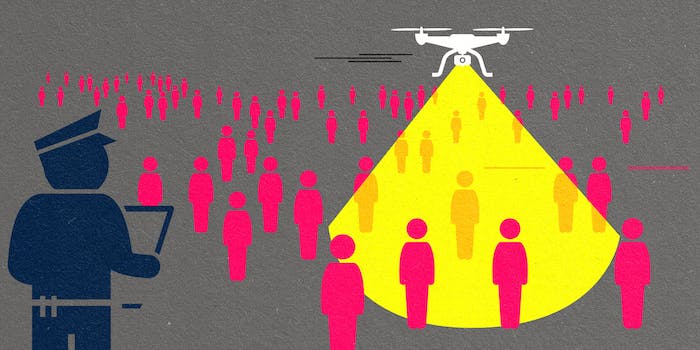 Drones are being used to police social distancing. You won’t like what comes next

The expansion of use is alarming.

For years, drone surveillance wasn’t something Americans really had to worry about. Police departments that sought to use drones were largely rebuffed, so citizens weren’t seeing drones flying around major cities, stoking fears.

But now, with the country facing a historic pandemic, police departments around the country have turned to drones on a regular basis under the auspices of public health. But what is currently a tool for preventing the spread of coronavirus may become a tool for violating your rights in the not-too-distant future.

In order to enforce social distancing rules, police departments around the U.S. have been deploying drones equipped with loudspeakers to tell citizens to disperse in areas where people are congregating.

It’s been reported that police departments in Savannah, Georgia; New Jersey City; and Daytona Beach, Florida have used drones to enforce social distancing. This may simply seem absurd and rather comical, but civil liberties groups are worried that we’re heading down a slippery slope that could lead us to major violations of our privacy.

While police departments are only using drones with speakers now, if the practice of police using drones becomes normalized, we could soon see a time when police are using technology on drones that can identify any civilian on the street using facial recognition software to drones that can access the data on your cell phone while they’re flying by.

Police departments across the country have been interested in using drones for surveillance for years, but they’ve often faced pushback from the public when they’ve tried to initiate these kinds of programs. People don’t like the idea of police officers creeping on their property or following them around using a drone.

However, with so much of the public desperately looking for ways to beat the coronavirus pandemic, this may be a time when police departments that want to use drones to enforce something like social distancing rules could receive far less pushback. A Harris poll from late March found a majority of Americans were willing to sacrifice their privacy in numerous ways to combat the pandemic, so it’s not hard to imagine them accepting police departments using drones.

Matthew Guariglia, a policy analyst for the Electronic Frontier Foundations, tells the Daily Dot that during a crisis people often feel that using “surveillance tech that would have been unthinkable” in the past now seems “absolutely necessary.” He says the problem with allowing police departments to use drones now is that they likely won’t stop using them once this crisis is over.

“I think in some way it normalizes policing by drone in a way that we might regret once the crisis is over,” Guariglia says. “We want to make sure that the surveillance equipment that is being deployed is what medical experts say will actually help and that it’s not just police getting their surveillance wish list that they’ve always wanted and now have a justification for.”

Guariglia says that once this crisis is over police might use drones to surveil protests, for example, in a way that could infringe people’s rights.

He says the drone could utilize facial recognition technology to identify every person who went to the protest, and if one person does something illegal while the protest is going on, numerous individuals who had nothing to do with the criminal act could be arrested days later.

“A face recognition drone only needs to do one or two passes and they can have the names and faces of every single person who attended, which obviously has really startling implications for people who are afraid of retribution for getting involved in politics and might chill people’s ability to practice their First Amendment-protected activities,” Guariglia says.

Outside of protests, there are many other situations where a drone identifying that you were in a certain place at a certain time could get you in trouble. Guariglia says you could be walking past an area where a crime is occurring without realizing it and suddenly be implicated in that crime. Faulty surveillance often results in a person being wrongly arrested, such as when an Arizona man was arrested for murder in 2018 because location data police obtained from Google said he was at the scene of the crime when he was not. Drones could amplify that.

Jay Stanley, a senior policy analyst with the ACLU Speech, Privacy and Technology Project, tells the Daily Dot that the police should just use a megaphone if they want to tell people to disperse without getting close to them. He says there’s no reason police departments should be using drones.

“It threatens to normalize a powerful surveillance technology,” Stanley says. “The upside of using this technology during this crisis is highly questionable, and the downside is longer-term but much more real.”

Not only could police departments equip these drones with technology like facial recognition, there are many other invasive technologies that could be used by these drones that many might not be aware of.

For instance, police departments across the country have been known to utilize devices called cell-site simulators that imitate cell phone towers so that nearby cell phones will try to connect with them.

Once your phone connects with this device, it can determine where you’re located and harvest data from your phone like your text messages, who you’ve called, and even your photos, and can be done without a warrant. Many states and the Trump administration are already proposing using cell phone location data for contact tracing, so police departments could end up vacuuming up much more data than Americans realize while claiming to simply be protecting public health.

If you think you’re safe from a drone spying on you once you’re inside your home and have the curtains drawn, that might not be the case. Police departments have also been known to use technology that utilizes radar or other types of sensors to see if someone is inside a building and what they’re doing.

“There are some technologies that do allow for imaging through walls,” Stanley says. “It’s not very high resolution, but you can tell that there are people there, for example.”

During coronavirus, you can imagine a family gathering inside someone’s home suddenly becoming an excuse for police to raid. After this crisis is over, police could use this kind of technology to keep tabs on pretty much anyone they want.

“Whatever the latest state-of-the-art surveillance technology is, it’s a way to put them up in the air and increase their power,” Stanley says.

Both Guariglia and Stanley agreed that the police should not be using drones, and if a police department really wants to start using drones for criminal investigations, it should have to consult the public.

Some cities, such as Seattle and Oakland, have passed Community Control Over Police Surveillance (CCOPS) laws that require police departments to essentially get permission from the public before moving forward with any new surveillance programs. That can be a good way for the public to know what kind of technology their police department is interested in using and how it intends to use it before any such program is allowed to begin.

Everyone wants to run to new technology when there’s a crisis because they’re hoping that new piece of tech will be the silver bullet we need to put an end to it. But once we allow a little more surveillance to slip by, it tends to stick around.