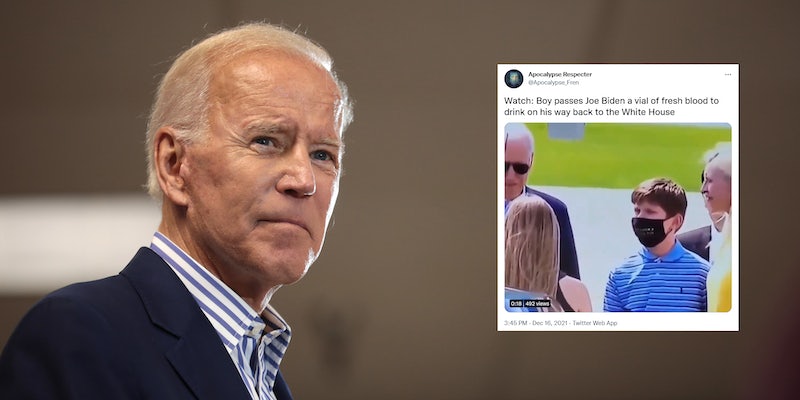 But it turns out that the video is fake.

The footage, shared by the Twitter user @ProjectPelosi, purports to show a young boy discretely handing Biden a vial of his own blood.

“Boy passes Joe Biden a vial of fresh blood to drink on his way back to the White House,” a tweet accompanying the video said.

Although @ProjectPelosi’s account was suspended shortly after, the video was downloaded and shared across the platform by countless other users.

The footage was cited by QAnon believers as proof of their most outlandish theories, mainly that Biden and other high-profile Democrats were child-eating Satanists.

Some even went as far as to tag the FBI on Twitter with the hopes that the federal agency would arrest the world leader.

The video also went viral on Facebook, where users were likewise convinced of its authenticity.

“Can someone please explain to me like I’m 5 why a kid would be secretly palming Joe Biden a vial of blood?” one user asked.

🌎 Save the world a little bit, one gift at a time

The best holiday gift is the one that gives back after it has served its purpose. Instead of splurging on single-use items with seconds-long shelf lives, you can buy eco-friendly gifts for everyone on your holiday list.

Don’t be fooled by false claims about the sustainability of products. Here’s your guide to shopping for eco-friendly gifts, plus a list of some of the best ones available right now.

Prior to their suspension, @ProjectPelosi confirmed to the Daily Dot that they knew the video was fabricated. The account claimed that the video had been given to them by a meme creator who had asked to remain anonymous.

The video is based off of actual footage from July of this year during Biden’s visit to Kentucky. After deboarding Air Force One, Biden was filmed greeting Kentucky Gov. Andy Beshear (D) and his family.

The video appears to show Biden handing something, possibly a mask, to Beshear’s son. The blood vial was later edited into the video.

Despite the obvious fabrication, conspiracy theorists continued to promote the video as legitimate online.

“I really can’t get over this video of a child covertly passing Joe Biden a vial of blood,” another Twitter user said.

Conspiracy theorists even began referencing the video in replies to tweets from the president. After asking legislators to pass his Build Back Better Act, one user asked why he had been passed the vial of blood.

“You mean like having little boys secretly pass you a vial of blood on camera?” the user wrote.

Unfortunately for the QAnon crowd, no evidence has ever shown that Biden feasts on the blood of young children.