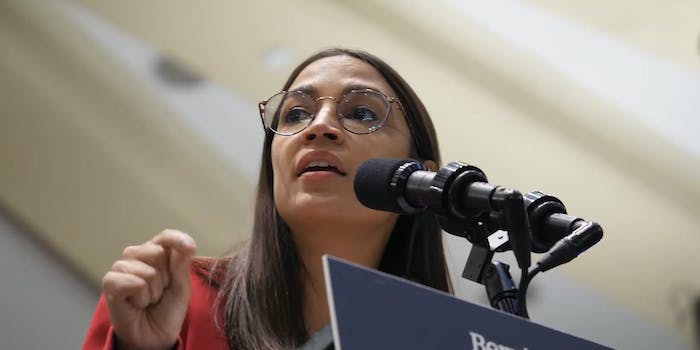 Rep. Alexandria Ocasio-Cortez (D-N.Y.), commonly referred to as AOC, recently found herself at the center of a bizarre conspiracy theory that accused her of a heinous crime this week: Owning a bar.

The claim appears to have stemmed from Paula Jean Swearengin, a former U.S. Senate candidate from West Virginia who made headlines this month after leaving the Democratic party.

During a recent interview with Jimmy Dore, a left-wing comedian and political commentator prone to conspiracy theories, Swearengin alleged the AOC’s image as a working-class bartender turned politician had been fabricated.

The evidence? AOC, according to Swearengin, had actually co-owned the “Flats Fix” taco bar she had worked at prior to becoming a legislator.

The claim quickly made its way to Twitter and was amplified by Jackson Hinkle, another left-wing political commentator and YouTuber. Hinkle stated that sources within the Justice Democrats, a progressive political action committee, confirmed to him that AOC had in fact owned the bar.

Hinkle also shared a screenshot from a 2018 Los Angeles Times article which mentioned how AOC had “helped launch Flats Fix,” suggesting that the passage was further proof of her ownership.

The allegation was shared across Twitter by detractors of AOC from across the political spectrum.

“Help me out here. How many of you knew that AOC while being portrayed as a poor bartender was actually co-owner of said bar in NY, had worked for, and was being groomed by the Kennedys to gaslight the shit out of you?” @thecraigrpowers tweeted. “Was it just now? Just curious…”

Dame is closing the pleasure gap, one sex toy at a time

Women are four times more likely than men to find sex less than pleasurable. Sexual wellness company Dame is looking to close the pleasure gap with their products, engineered to help real humans and couples pursue better pleasure experiences. Here are two of its must-try products:

-Pillo, the pillow for sex: A comfy-soft, yet structurally firm pillow for sex that supports you from every angle. Whether you’re trying new adventurous positions, or taking your favorites to new heights, the Pillo is a fantastic pillow with an edge.

Dame stands by its high-quality products, which come with a three year warranty and hassle-free returns within 60 days. It even has a quick quiz that helps find the best sex toy for you and your partner’s needs. Visit Dame to see what it can bring to your bedroom, and beyond.

Matt Binder, a popular left-wing Twitter user and YouTuber, looked up the business records for Flats Fix. The records show that the bar is owned by three people who run several food establishments under the company Themefood Inc.

Binder also noted that Themefood Inc. was founded in 1986, nearly three years before AOC was born.

Dave Weigel, a journalist with the Washington Post, took the daunting step of picking up a phone to actually call Flats Fix. Weigel was able to confirm, unsurprisingly, that AOC had never owned the bar.

Countless Twitter users added that AOC’s help in launching Flats Fix does not in any way imply ownership.

“Have you ever worked a day in the food service industry?” @Fuzzy_DunIop said. “If you did you would know ‘helped launch’ doesn’t mean she owned the place.”

In the face of overwhelming evidence, Hinkle went on to delete his original tweet and issue a correction on Twitter.

“A tweet of mine repeated a claim from sources at the Justice Dems, including a former JD candidate, that AOC co-owned the bar she worked at in NY,” Hinkle tweeted. “This statement has been disputed, leading me to remove the tweet until there is documentary evidence (beyond my sources) to prove it.”