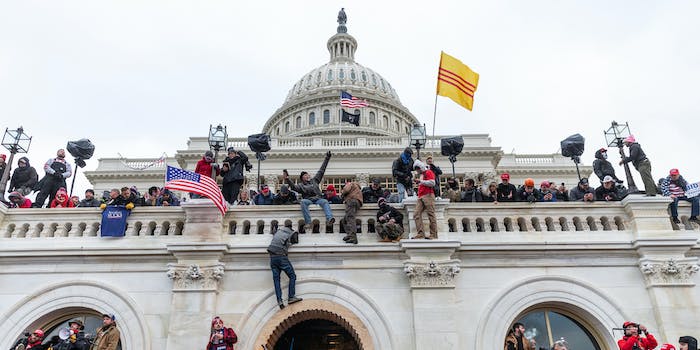 Conspiracy theorists accuse D.C. cop attacked on Jan. 6 of actually being a rioter

Conspiracy theorists accuse D.C. cop attacked on Jan. 6 of actually being a rioter

Conspiracy theorists are accusing a D.C. police officer of carrying a Confederate flag during the Jan. 6 riot at the Capitol.

But it isn’t just any officer being accused. Instead, conspiracy theorists are pointing the finger at Metropolitan Police Officer Michael Fanone, who recently drew the ire of Trump supporters after testifying to Congress last week about the failed insurrection.

While speaking to lawmakers, the 40-year-old officer recounted being dragged into the crowd as rioters called for him to be killed “with his own gun.”

Fanone eventually fell unconscious, suffered a heart attack, and was later told by medical professionals that he had experienced a concussion and a brain injury.

Posts comparing images of the officer to one of the rioters began spreading online this week across social media platforms such as Facebook, TikTok, and Twitter, where users alleged that Fanone was nothing more than a “crisis actor.”

The claim was even amplified by Ian Smith, the conspiratorial gym owner from New Jersey who has become a folk hero to conservatives for defying COVID restrictions.

The narrative is part of an ongoing effort by Trump supporters to either downplay the violence at the Capitol or to pin the blame entirely on a range of characters including the FBI, Antifa, and the so-called Deep State.

The claim about Fanone, however, is completely false.

Let these master cooks make dinner for you tonight

The exhaustion of cooking at home is 100% real, and more now than ever since going to a restaurant can feel less than safe with the Delta variant of COVID out there. Sure, you can order takeout, but it’s not the same! Enter the MasterClass dinner playlist, which walks you through four different courses with four esteemed chefs. From drinks with Wolfgang Puck to dessert served by Thomas Keller, it just might inspire you to create something completely new in your own kitchen.

The man pictured with the Confederate flag is not Fanone but Delaware resident Kevin Seefried.

Seefried has already been identified, arrested, and charged for his involvement in the riot all the way back in January.

Seefried even admitted in an interview with the FBI that he had brought a Confederate flag with him to D.C. that he normally kept displayed on the outside of his home.

For example, while Fanone has clearly-visible neck tattoos, Seefried does not. Fanone also testified to being in his uniform, not in street clothes like the rioter, throughout the entire attack on the Capitol.

Pictures from that day also show Fanone in riot gear while being attacked by the crowd.

Sean Hickman, a spokesperson for the Metropolitan Police Department, also confirmed to PolitiFact that the rioter pictured with the Confederate flag was “not Officer Fanone.”

While many conspiracy theorists have now deleted their remarks in the face of such overwhelming evidence, others still refuse to believe that Fanone and Seefried are two different people.