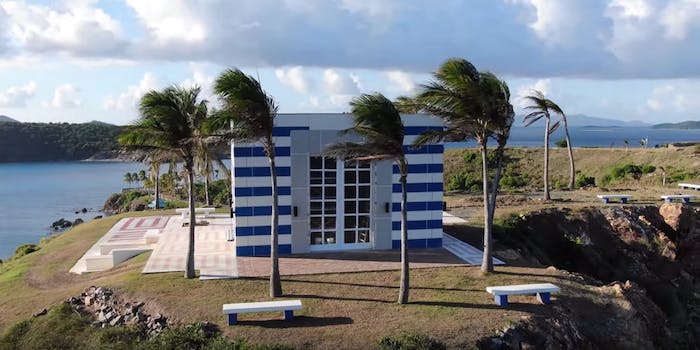 Conspiracy theorists are convinced that antivirus pioneer and rogue presidential candidate John McAfee is on a quest to expose convicted sex offender Jeffrey Epstein through a secret YouTube channel.

In a Tuesday post on 4chan’s notorious /pol/ message board, a user claimed that McAfee was responsible for a mysterious YouTube channel that is posting high-definition drone footage of Epstein’s private island, Little Saint James.

The channel, which goes by the name “Rusty Shackleford,” was created in April of 2018, but only appears to have started uploading content on July 10–four days after Epstein’s July 6 arrest. Since then, the channel’s 29 videos have accrued more than 1.3 million views combined.

The videos show an aerial view of Epstein’s infamous island, where former workers claim to have seen the billionaire with what appeared to be underage girls. Epstein is currently in a New York jail facing sex trafficking charges.

The 4chan claim that McAfee is responsible for the YouTube channel arose after the former software guru went “dark” on Twitter on July 16. Three days later McAfee alleged that the Central Intelligence Agency (CIA) was attempting to capture him and his wife, Janice Dyson, while on his boat in the Caribbean.

The CIA has attempted to collect us. We are at sea now and will report more soon. I will continue to be dark for the next few days. pic.twitter.com/o79zsbxISl

An assistant of McAfee, Rob Loggia-Ramirez, announced that McAfee had been detained in the Dominican Republic. On Wednesday, McAfee uploaded a photo of himself stating that he had been released.

Leaving detention (don't judge my looks – four days of confinement). I was well treated. My superiors were friendly and helpful. In spite of the helpful circumstances, we've decided to move on. More later. pic.twitter.com/V4539uYCHR

McAfee has been on the run from U.S. tax authorities since January and admits that he has refused to pay an income tax for the last 8 years. During his time at sea, McAfee has traveled via his yacht to Cuba and other locations in and around the Caribbean.

While McAfee does happen to be in roughly the same part of the world as Epstein’s island, there is no evidence that he has directly been to it.

Conspiracy theorists and QAnon followers say that McAfee was silenced by the “deep state” for exposing Little Saint James (although the drone videos don’t show any criminal activity).

4chan users also note that McAfee owns a drone. Of course, that’s hardly evidence that McAfee has been scoping out Epstein’s island, as many people are drone owners.

Yet, in April–when McAfee was out of the country–the account tweeted a complaint about a beer produced by a Chicago-based company known as Goose Island. The Daily Dot contacted Goose Island by phone and confirmed that it does not sell its beers in any of the locations around the Caribbean where McAfee has been.

@GooseIsland What is going on inside if my beer? What am I drinking? Am I going to die?? pic.twitter.com/gg9wh9M3cx

The Daily Dot also reached out to the Rusty Shackleford Twitter account in question, which hasn’t been active since late April, but did not receive a response.

Despite the claim having no hard evidence to stand on, it has already taken hold among the conspiracy-minded online.

John McAfee is dropping the heavy bombs now! https://t.co/KNpAudXqVF (his account)
Seems like he's been flying drones over Epstein's pedo island. BACK EVERYTHING UP!

The Daily Dot reached out to McAfee and his associate Loggia-Ramirez but did not hear back by publication time. Moments after, however, McAfee posted a photo of himself in the jail cell he reportedly spent the last several days in.

Seems like a difficult place to both operate a drone and run a YouTube channel from. For now, it remains a mystery as to who is uploading all that drone footage.

My second arrest in one week – a record I think. pic.twitter.com/wOQ99nWGYC