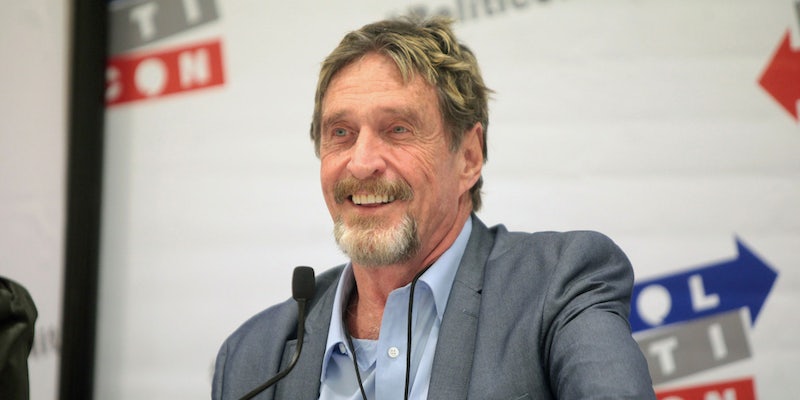 John McAfee to run 2020 bid while exiled on a boat

The antivirus icon has fled alleged criminal charges from the IRS.

Antivirus software pioneer John McAfee is currently “in exile” on a boat, but he still plans to run a 2020 presidential campaign while fleeing U.S. authorities.

Known best for founding McAfee Associates, the 73-year-old tech icon revealed in a series of tweets this week that his presidential run, first announced last year, will carry on undeterred despite alleged felony charges from the IRS.

McAfee claims that a grand jury has indicted both he and his wife “for various tax fraud issues.” While details are scarce, McAfee admits he has refused to pay taxes for the past eight years.

The McAfee 2020 Campaign is, as of this day, in exile. I am being charged with using Crypto Cuttencies in criminal acts against the U. S. Government. More videos coming shortly. Stay tuned. pic.twitter.com/C75zcbnKTD

According to CNET, the IRS has not responded to inquires about the nature of McAfee’s claim. McAfee, however, believes he has been charged for using cryptocurrencies “in criminal acts against the U.S. government.”

Despite the alleged indictment, McAfee plans to run his entire presidential campaign from his “Freedom Boat.”

The plan? McAfee says that “thousands” of volunteers will stand in his place with the help of masks made to look like him.

How we will run my campaign in exile: pic.twitter.com/evqxZQRTxH

“[Volunteers] are creating masks of my face which are going to be given to thousands of people in two different groups,” McAfee said. “First our road warriors who, once a month are going to appear in parks, street corners, restaurants all around America while I speak through loudspeakers through them.”

McAfee added that the same method would be used in order for him to attend political conferences.

“I will be going to conferences as a surrogate,” McAfee said. “I will be looking at people through a camera, answering questions, shaking hands as I tell my surrogate to shake hands, and speaking.”

So far McAfee alleges to have traveled near Newfoundland and the Bahamas and is preparing to head towards Venezuela.

In typical McAfee fashion, another video purports to show the cryptocurrency enthusiast declaring an arsenal of weapons while in the Bahamas.

A taste of what we are going through. The long arm of the corrupt elements of the US Government reaches the far ends of the earth in unexpected ways. My charisma and the veracity of our story has so far overcome every threat by the IRS. God bless the honor of the Bahamians. pic.twitter.com/CmIRsGVpL4

Despite the apparent lengths McAfee is willing to go to keep his presidential bid alive, the business magnate says being elected is not his primary goal. Despite his enthusiasm, the chances that he or one of his lookalikes will come even remotely close to a presidential debate stage is non-existent.

Please people .. don't get distracted by trivialities such as "am I eligible to be President?" Remember: i do not want to be president! I just want the stage. I just need to run. I did it once before in The Libertarian Party. Who cares whether I can?? I'm fucking doing it now!!

The so-called IRS fiasco is not the presidential hopeful’s first run-in with the law. McAfee previously made headlines in 2012 after being named a “person of interest” by police in Belize in connection with the murder of American expatriate Gregory Viant Faull.