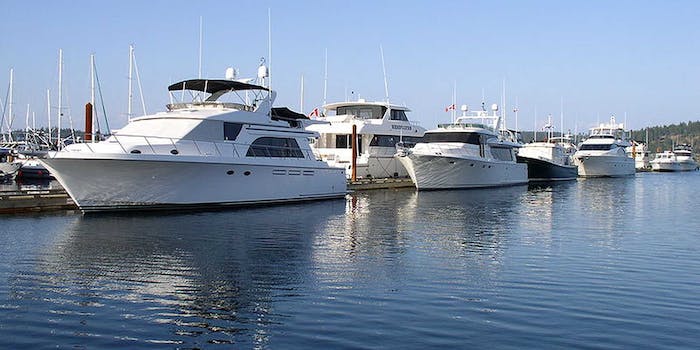 Gubernatorial candidates debating over yachts is 2014 election in nutshell

A rising tide of sex slaves lifts all yachts.

How does one perfectly sum up an election cycle in which candidates from both political parties seem so disconnected from reality that less than one-third of the nation’s electorate is even remotley excited to vote?

The answer to that question is simple: a video of Connecticut’s two leading gubernatorial candidates arguing over the names of their respective yachts.

In a televised debate between Connecticut’s sitting Democratic Governor Dan Malloy and Republican challenger Thomas Foley, a viewer named Charles Taylor from Essex, Conn. wrote in with a question. “‘Sapphire’ is the type of a gemstone and the name of Dennel Malloy’s boat. ‘Odalisque’ is a type of female slave or concubine and the name of Tom Foley’s boat,” Taylor asked. “What made you chose these names for you vessels and, if you didn’t choose the name, why have you not changed it?”

The candidates then spent the next three minutes debating whether naming your $5 million yacht after a sex slave is offensive or merely pretentious. Really, this is a thing that happened.

For his part, Malloy insisted that Sapphire was the name the boat was “born with” and he was too cheap and/or lazy to get it changed. Also, he no longer owns the boat in question—proving the old adage that two happiest days in a boat owner’s life are the day he buys the boat and the day that he sells it.

“But, if I had a boat named after a sex slave, I would have changed the name,” continued Malloy. “The idea that one would run for governor of the state of Connecticut with a $5 million yacht registered in another country… and continue to carry on a name that represents a sex slave is just horrendous… Not too many people have $5 million yachts and don’t pay any income taxes [on them] for three years in a row.”

Odalisque is a French word referring to a female slave or concubine, specifically one belonging to sultan in the Ottoman empire.

After noting that the Governor had some trouble paying the bills on his yacht, Foley defended the name of his own yacht: “I’m a great enjoyer of the arts and culture,” he insisted. “Odalisque are the names of many great paintings… I think it’s a very nice name… Odalisque really means a beautiful woman or a beautiful thing in the art world, it doesn’t mean a sex slave.”

“The governor certainly isn’t going to the boat owners’ vote,” added Foley with a laugh.

As of election day, polling has the two candidates neck-and-neck, so maybe discounting either the yacht owner or sex slave votes isn’t the best idea.