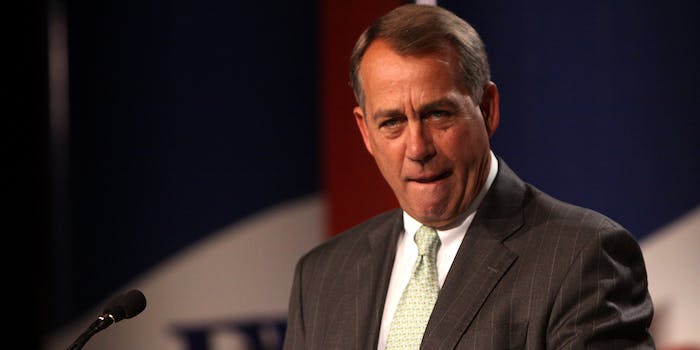 But they are talking about guns and mental health.

In the roughly two days since 22-year-old Elliot Rodger allegedly killed six people and injured seven more near the University of California, Santa Barbara before taking his own life, Washington politicians have remained strangely silent on the most prominent online debate to stem from the tragedy: Violence towards women.

The #YesAllWomen hashtag, reportedly first used by a blogger Kaye M on Saturday (though there are conflicting reports about the hashtag’s origin), has become the central touchstone for unnumbered women to air their tales of physical, verbal, and mental abuse by men.

Guys, I’m going to be tweeting under the #YesAllWomen hashtag. Let’s discuss what “not all men” might do, but women must fear.

#YesAllWomen’s rise on Twitter and elsewhere around the Web comes in direct response to Rodger, whose 141-page manifesto and string of YouTube videos reveal a young man who saw his lack of affection from women as justification for killing them, and the “men’s rights” movement that so often espouses overlapping ideas.

“You girls have never been attracted to me,” Rodger said in one of his YouTube videos.

“I don’t know why you’ve never been attracted to me, but I’ll punish you all for it. It’s an injustice—a crime. I’m the perfect guy, yet you throw yourself at all these obnoxious men instead of me, a supreme gentleman… If I can’t have you, girls, I will destroy you. You denied me a happy life, and in turn I will deny you a life.”

While thousands upon thousands of Twitter users have taken part in the #YesAllWomen debate, high-profile politicians remain notably absent. In fact, as of this writing, only two members of Congress have joined in the conversation at all.

The first is Rep. Keith Ellison (D-Minn), who posted this tweet on Sunday:

Take a moment tonight to read #YesAllWomen for your mother, your sister and your friends.

The second and final #YesAllWomen tweet from Congress comes from Rep. Joaquin Castro (D-Texas), who retweeted a story from the Los Angeles Times about violence towards women:

No Washington politician, it seems, has joined in the conversation with any of the iterative hashtags, like #YesAllPeople or, mercifully, #YesAllMen. But that’s not to say they haven’t responded to the shooting at all. Primarily, Members have offered their “prayers” and “thoughts” for victims and their families.

Our hearts are broken. Thoughts & prayers are with victims & families affected by shootings at #SantaBarbara.

Horrified and saddened by last night’s senseless mass shooting in Isla Vista. My thoughts are with the victims and their families.

Praying for victims & families of #SantaBarbaraShooting. Enough is enough. Too many gun violence victims and too little action.

The recent mass shooting in CA is heartbreaking. We’re overdue for a national conversation about mental health and guns #StopThisMadness

The most substantial response to the UCSB tragedy on social media, by a politician comes from Rep. Lois Caps (D-Calif.), who represents California’s 24th district, home of UC Santa Barbara. She posted this to Facebook on Saturday, the morning after the shooting:

We are all grieving over the lives claimed in the senseless tragedy last night in Isla Vista. Now is a time for us as a community to come together and pray for the victims, give strength to those who were injured and support all who are touched by this unconscionable act.

While members of Congress may have not jumped into to the debate about misogyny and violence towards women on social media, some have entered the conversation through another door: Guns and mental health.

“I am going to urge that we bring back those bills,” Blumenthal said. “Maybe reconfigure them to center on mental health, which is a point where we can agree that we need more resources to make the country healthier. The Congress will be complicit if we fail to act.”

“I think that is something on which there is agreement,” Thune said in response to putting more resources into treating mental illness. “That is where we ought to be focusing our efforts.”

New York Republican Rep. Peter King, who has a history of campaigning for greater gun control, echoed Blumenthal’s call for cracking down on gun purchases by those with known history of mental illness.

“This tragedy demonstrates once again the need to keep guns out of the hands of the mentally ill,” King told the Washington Post.

“We’ve got to look at how we define mental illness, who is denied weapons and who is not, and focus the discussion,” he added. “We have to have this debate.”

King says he hopes to introduce legislation that addresses this issue, but says it faces an uphill battle in Congress.

The day before the Santa Barbara shooting, Sen. Edward Markey (D-Mass.) and Rep. Carolyn Maloney (D-N.Y.) introduced legislation in the House and Senate that would provide $60 million over the next six years for the Center for Disease Control and Prevention (CDC) to study gun violence prevention and firearm safety. The bills likely face tough opposition from Republicans in Congress and outside interest groups.

Correction: Rep. Joaquin Castro is a Democrat, not a Republican. We regret the error. | Update: There are conflicting reports about who first tweeted the #YesAllWomen hashtag. We have updated the copy above to reflect the potential discrepancy.