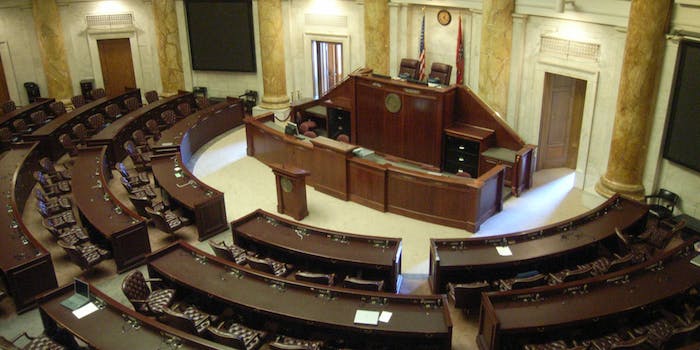 House to vote on amendments to defund NSA spying

The NSA can't spy if it doesn't have any money.

See update below for latest details from Thursday’s House vote.

Members of Congress who oppose the National Security Agency‘s sweeping surveillance powers are trying to limit the agency the way that only Washington can—by hitting them in the wallet.

In June 2013, soon after former NSA contractor Edward Snowden‘s disclosed evidence of those programs, Rep. Justin Amash (R-Mich.) introduced the first anti-NSA bill. Designed to cut funding for the agency’s program that tracks Americans’ phone records in bulk by amending the Department of Defense Appropriations Act as it went up for annual renewal, the bill was surprisingly close, defeated by a margin of only 12 votes.

With the defense spending bill up for this year’s renewal, Reps. Thomas Massie (R-Ky), Alan Grayson (D-Fla.), and Zoe Lofgren (D-Calif.) have introduced their own amendments to reign in the NSA.

Massie’s amendment tackles a physical issue. It aims to keep the agency from building “backdoors” into hardware that make it easier for the NSA to exploit the devices, as the agency has reportedly done with, among other gadgets, iPhones.

Grayson’s addition follows a similar theme, and would put a stop to programs that intentionally undermine online encryption. Security expert Bruce Schneier has referred to as the NSA “breaking most encryption on the Internet.”

Lofgren aims to address one of the earliest fears Americans had from Snowden’s documents—that the NSA’s PRISM program allows the agency to easily get information from tech companies like Facebook and Google, thus subjecting innocent people to government surveillance.

Privacy advocates have acted quickly on the proposed amendments with the creation of an action site, shutthebackdoor.net, which urges Americans to express support for Lofgren’s amendment.

The House vote is expected to take place either Thursday evening or Friday.

Update: In a 293-123-1 vote late Thursday night, the House of Representatives passed Lofgren’s amendment, which prohibits the NSA from using any of its funding for so-called “backdoor searches” of Americans’ emails, Web browsing histories, or chat logs.