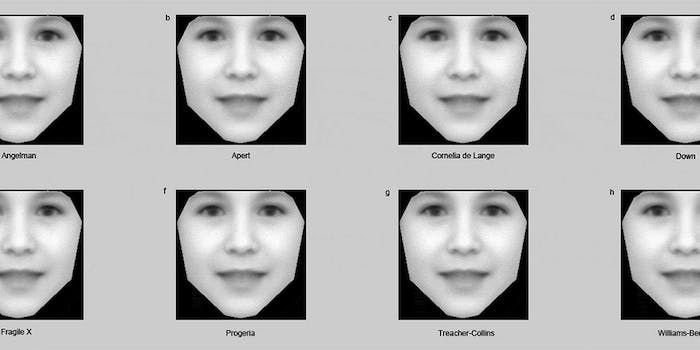 Software can analyze faces in photos for genetic diseases

You might find more than your dad's nose in family photos.

We already know that computers can recognize human faces, and apparently decipher secret codes left on bird eggs, but researchers at the University of Oxford have now developed software that can diagnose rare genetic diseases just from glancing at a portrait.

It all started with over 1,300 photos of people who are known to have one of eight different genetic disorders including Down’s syndrome, Angelman syndrome, and Progeria. The software analyzed the photos and made observations about various facial features for comparison. With a total of 36 data points from each photo, the system quickly learned the effect each disorder had on a person’s appearance.

When the software is fed a new photo of a person who may or may not have a genetic disorder, it scans their features and then ranks the potential diagnoses based on the likelihood that the individual pictured has it. The first tests were promising, with the system correctly predicting the specific genetic defect in 93 percent of individuals.

One particularly interesting test subject was the late Abraham Lincoln, which the smart software suggested may have suffered from Marfan syndrome, which can result in skeletal abnormalities. It was once postulated that Lincoln had the disorder, though today most geneticists believe he did not.

Since its initial testing, the system has been gotten even smarter, and is now capable of identifying 90 different disorders. The researchers hope that it will be a new first step in diagnosing genetic issues without the need for multiple doctor visits. If a computer can offer a hint at what a person may suffer from, doctors have a great starting point for more definitive testing.