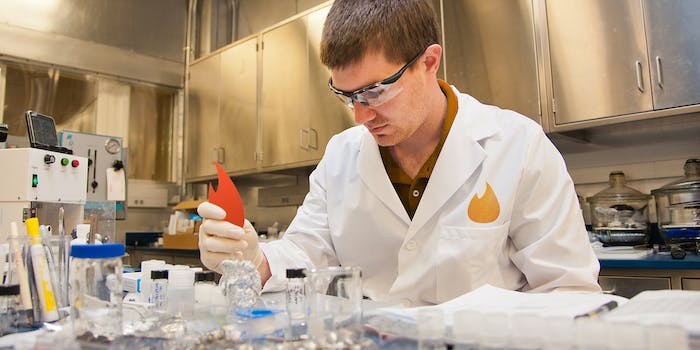 Everything you need to know about Tinder consultation services

Tinder too much for you to handle? Consider these consultation services dating delegation.

Navigating the thicket of potential Tinder matches can be a complex and arduous process. Swiping quickly becomes exhausting, as the barrage of profiles only grows larger every day thanks to the app’s reported 10 million daily users. With users seeking everything from soulmates to one-night stands, a right swipe and a match doesn’t always mean success.

But luckily for those drowning in a sea of swipes, there is hope. As Tinder’s membership grows, so does the array of outlandish Tinder-related services. Just recently, Tinderheadshots.com was launched, offering invidiuals professional profile pics sure to garner more matches.

More curious than head shots though, is the growing market of Tinder consulting services. From auto-likers to devoted “wing women,” the possibilities of pimping your profile and maximizing your success are only limited by your budget.

We’ve taken the liberty of thoroughly reviewing three respective Tinder consulting services, ranging in both price and approach, so you can determine which is right for you.

If you know anything about Tinder, you know that guys who wish to maximize their yield implement a scorched earth strategy by swiping right, or yes, on every match they are presented with. While some refer to this as playing “power Tinder,” ladies on the receiving end of this method have decidedly angrier feelings about it.

But literally swiping right on every profile is rather luddite, not to mention time consuming. Auto-likers save users arthritic pain and time by hacking the system and automating the swiping process entirely. Apps such as Tinder Auto Liker and other do-it-yourself hacks game the system like a nickel slot in Vegas.

These programs “like” all candidates within the users given sex, age, and location parameters, thus resulting in an inbox full of hundreds or even thousands of matches in minutes without literally lifting a finger.

Georgie Casey, the coder of Tinder Auto Liker, spoke with the Daily Dot, about his auto-liker creation. He describes the app’s demographic as “aesthetically challenged of both genders who know you’ve got to kiss a lot of frogs to find their prince/princess! That’s corny but true. No guy or girl who’s really good looking uses the auto-liker, their phone would be blowing up and unmanageable.”

In mere minutes you’ll receive tens, hundreds, or potentially thousands of matches with no swiping involved. While it takes the rather fun swiping process out of the app, it also delivers big results.

Auto-likers and auto-swipers violate Tinder’s Terms of Service under the “Prohibited Activities” section which bans:

Use any robot, spider, site search/retrieval application, or other manual or automatic device or process to retrieve, index, “data mine,” or in any way reproduce or circumvent the navigational structure or presentation of the Service or its contents.

In addition to violating Tinder’s TOS, the flood of matches can be prove labor intensive to navigate. Weeding out matches is much more difficult on the back end than in the swiping process. Users have reported not even wanting to open the app because of the overwhelming matches in their inbox.

“The truth about the birth of TinderUs is that it started as a joke,” wrote the service’s founder, Michael Raven. One afternoon in June, he had joked with a friend that he should start a Tinder consulting service for those unfortunate swipers who can’t get matches, and two hours later the site was launched and the company was born. Raven reports that minutes after posting to Product Hunt he had already received two bookings and a surge of traffic to the site.

After paying the $50 consultation fee, you’ll be emailed to set up a time and date to chat with one of Raven’s consultants. These are “friends who work in Fashion who are excellent at giving advice on appearance, conversation, and overall personality,” he writes.

The consultant selects your five best photos, your main image, helps you with profile copy, and provides insight on what’s appealing to the the opposite gender. The whole process is carried out via Facebook chat, so the consulting agent has access to your photos and profile information to help you present your most exciting self.

This is entry level Tinder consulting for those who wish to improve their matches via minor tweaks to their profile. Recommended for someone seeking a constructive critique from the opposite sex; someone who wants an unbiased opinion on appearance and introductions. If you’re a bit socially awkward, or just not sure how to begin traversing left and right swipes, this is the one for you. Given that it’s all carried out over Facebook chat, it’s an added bonus for the phone-shy.

My consultation was a pleasant experience with a friend of Raven’s named Rhyanna. Given that I’m currently in a relationship of over a year (thanks to Tinder-ing with no assistance!) it was a dummy session. Still, it was informational. She asked what I’d like to gain from my consultation as a user, how I’d like to present myself, and who I was looking for; we structured the rest of my session from there.

After scrolling through my photos, Rhyanna, began selecting the five best images and explained why she had selected them. It was nice to have a stranger’s perspective, given that’s likely who you’ll be matching with. 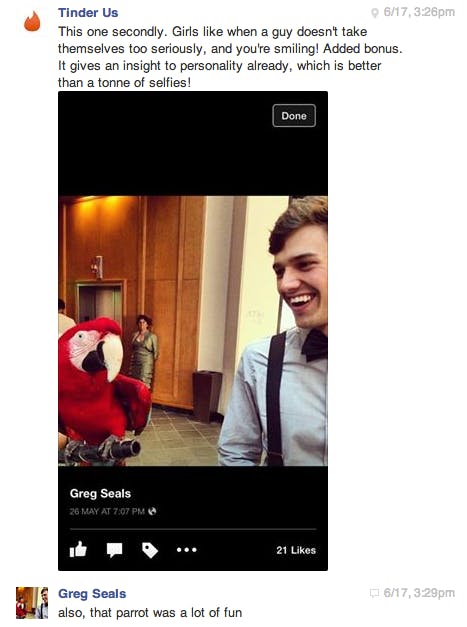 After the photos were chosen, she helped me curate an appealing tagline to add to my profile and the session ended with some practical advice about online dating in general. The things I learned from my time with Rhyanna are things that could be applied outside of Tinder to any photo-based online dating service.

Given that it all transpires over Facebook chat, the back and forth can be a little slow, but still worthwhile.

Cost: $50 for a consultation session

Tinder Done for You

This past March, a digital marketer for a pool supply company named Blake Jamieson gamed Tinder and garnered himself hundreds of matches and a whole lot of attention. Inspired by Jamieson’s hacks, Scott Valdez, creator of Tinder Done For You and Founder of Virtual Dating Assistants, reached out to Jamieson to partner on a venture that bills itself as “the first dating service ever that’s built specifically for the Tinder app.”

The service operates on a six point plan, with the draw being its “wing women,” who manage the clients profiles and help curate their photos and matches. After an initial 60-90 minute consultation with one of these “wing women,” photos are chosen and digitally enhanced with signature “attraction hacks” modeled after some of Jamieson’s methods.

From there, a team of writers (largely male) take over the creation of profile copy and begin sending messages on the client’s behalf to matches that meet his desired physical description (I say “his” because this particular service generally targets men). Ultimately, Tinder Done For You delivers dates either in the form of a set time and place or with phone numbers.

Deborah, one of the “wing women,” told the Daily Dot that they’re mostly patronized by successful businessmen, CEOs, and entrepreneurs who are very busy and tend to engage n casual dating. They also don’t have time to manage their own profiles. With an almost entirely heterosexual male demographic, Valdez gauges the average age range to be 34 or 35. He even bragged that Tinder Done For You has garnered the attention of online dating titans. “I can’t tell you what dating site it was, but it’s a dating site you definitely know,” he relayed giddily. “Their CEO is in the process of signing up.”

What Tinder Done For You offers that other consulting services don’t is its “magnetic messaging.” It has a 75 percent response rate to its icebreakers, which are formulated by a team of witty, quick writers who create multiple variations of playful pickup lines.

Valdez says they are tested over multiple dummy profiles and his own actual profile. “There was one that was talking about getting a bottle of whiskey and making a bastard child for the weekend” Valdez told the Dot. This one apparently received a 77 percent response rate.

He counts the app’s casual demeanor for the lines’ success, citing that you’re able to write messages with sexual overtones and playfulness that you wouldn’t be able to get away with on traditional online dating sites.

There’s an aspect of Tinder Done For You that feels a bit catfish-y. While the photos are still of the man they’ll ultimately meet in real life, the initial words and personality these girls are conversing with belong to someone else. Scott and Deborah both confirmed to the Dot that their writers and wing women always operate under the guise that they are the client, and leave it up for him to disclose to his matches that he used their services.

Photo via US Army RDECOM/Flickr (CC BY SA 2.0) | Remix by Jason Reed