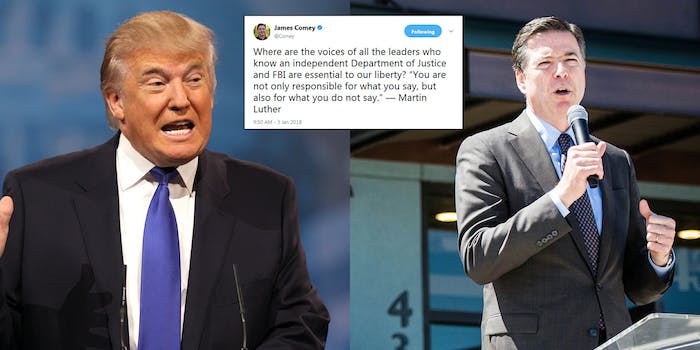 Comey fires back on Twitter over Trump’s ‘jail’ tweets

Former FBI Director James Comey started the new year just as he ended the last one: by making a not-so-subtle dig at President Donald Trump.

Comey called an independent Department of Justice and FBI “essential to our liberty” in a tweet on Tuesday morning, the day after Trump seemed to call on the Justice Department to “act” on former Democratic presidential nominee Hillary Clinton, her aide Huma Abedin, and Comey himself.

“Where are the voices of all the leaders who know an independent Department of Justice and FBI are essential to our liberty? ‘You are not only responsible for what you say, but also for what you do not say.’ — Martin Luther,” the former FBI director tweeted.

Where are the voices of all the leaders who know an independent Department of Justice and FBI are essential to our liberty? “You are not only responsible for what you say, but also for what you do not say.” — Martin Luther

Given the timing of the tweet, it’s likely Comey–who was abruptly fired by Trump, sparking claims of obstruction of justice and serving as a catalyst for the appointment of a special counsel–was commenting one of the (many) tweets Trump sent out on Monday, where he seemed to suggest that the Justice Department “jail” his political opponents.

In the tweet, Trump said Abedin, Clinton, Comey and “others” should be looked into by the Justice Department, which he claimed needed to “finally act.”

Tuesday’s tweet from the former FBI director was not the first time he’s made cryptic digs at Trump.

Just before the new year, Comey tweeted that he hoped 2018 would bring “more ethical leadership, focused on the truth and lasting values.”

After Trump’s former national security adviser Michael Flynn pleaded guilty to lying to the FBI about his communication with Russian officials, he tweeted a verse from the Bible about justice rolling down “like waters and righteousness like an ever-flowing stream.”

Comey also tweeted after Special Counsel Robert Mueller charged three former members of Trump’s presidential campaign as part of his investigation into Russian interference in the 2016 election and other related matters.