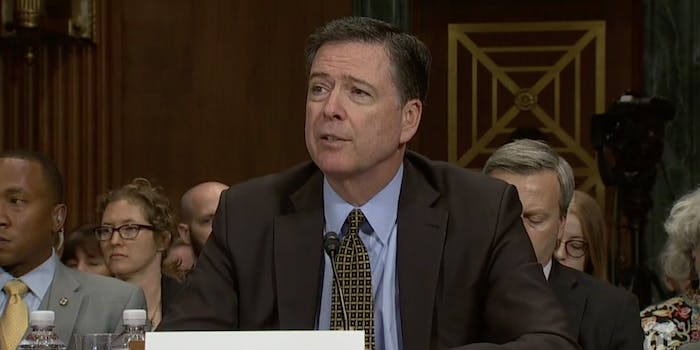 James Comey: Concealing Clinton probe ahead of election would be ‘death of the FBI’

'It makes me mildly nauseous to think that we had some impact on the election.'

FBI Director James Comey on Wednesday delivered an impassioned defense of his decision to alert members of Congress to the renewed investigation into Democratic nominee Hillary Clinton‘s emails less than two weeks before the 2016 presidential election, saying the thought that he influenced the outcome of the election made him “mildly nauseous.”

In testimony before the Senate Judiciary Committee, Comey painted his decision about whether to notify Congress that investigators had discovered additional emails Clinton sent over a private email system during her tenure as secretary of state as a choice between “really bad” and “catastrophic.”

Comey had told members of Congress under oath that the investigation into Clinton’s emails had concluded, which made it necessary to amend his testimony in light of the newly discovered emails despite the possibility of political fallout.

Comey added that not notifying Congress simply because it could influence the election would politicize the agency and result in the “death of the FBI’s independent institution in America.”

FBI Director Comey: Concealing Clinton probe would have been "death of the FBI's independent institution in America" https://t.co/eb1ePBkILV

Comey’s Oct. 28, 2016, letter to members of Congress, which was leaked soon after he sent it, said investigators had discovered additional Clinton emails during a probe into another case, which was later revealed to be a probe into former New York Rep. Anthony Weiner, the estranged husband of Clinton aide Huma Abedin. Delivered just 11 days before Election Day, Comey’s letter sparked a firestorm in the presidential election.

On Tuesday, Clinton said the Comey letter played a role in her defeat to Trump.

“If the election had been on Oct. 27, I would be your president,” Clinton said. She added, “I was on the way to winning until a combination of Jim Comey’s letter on October 28 and Russian WikiLeaks raised doubts in the minds of people who were inclined to vote for me but got scared off. And the evidence for that intervening event is, I think, compelling, persuasive.”

Trump responded in a string of late-night tweets on Tuesday night, claiming Comey helped Clinton by not recommending charges against her for the mishandling of classified information in her emails.

Although Comey stands by his decision to send the letter, he expressed anguish at the possibility that his actions may have swayed the presidential election.

“Look, this was terrible. It makes me mildly nauseous to think that we had some impact on the election,” Comey said. He added: “This has been one of the world’s most painful experiences. I would make the same decision. I would not conceal that on October 28.”

As of publication, Comey’s testimony remains ongoing. Watch a livestream of the testimony below: