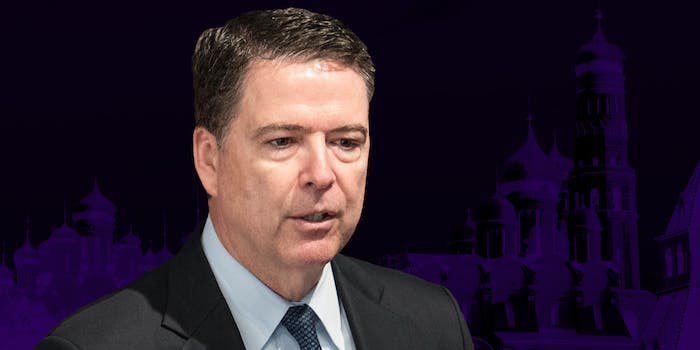 The New York Times reports that Comey met with Rod Rosenstein, the deputy attorney general, last week to request additional money and personnel for the agency’s Russia investigation. Rosenstein crafted the letter Trump used as the primary justification for Comey’s ouster, which cited his handling of the Hillary Clinton email case.

Washington Post reporter Ashley Park quickly confirmed the accuracy of the Times report. CNN also confirmed the report. A Department of Justice spokeswoman denied Comey made the request, telling the Times that it was “totally false.”

Comey’s request for additional resources to investigate Russia will further fuel widespread speculation that Trump fired Comey at least in part because the FBI’s Russia investigation includes probes into the Trump campaign’s ties to Russia.

In Trump’s letter to Comey, he claimed the former law enforcement official informed him “three times” that the president himself was not under FBI investigation. It is not clear when those assurances took place. Trump did not address an investigation into his associates.

According to Rosenstein, Comey’s firing was largely due to his handling of the FBI’s investigation into former Secretary of State Hillary Clinton‘s use of a private email system for government business. Rosenstein said Comey had lost the trust of the public and members of Congress.

Many Democratic lawmakers called for Comey to resign after he sent a letter to congressional leaders alerting them to newly discovered Clinton emails just 11 days ahead of the presidential election between Clinton and Trump. Democrats condemned Trump’s firing of Comey now and many have questioned the timing of his forced removal.

I am troubled by the timing and reasoning of Director Comey’s termination.

“The question is, why did it happen last night?” Sen. Chuck Schumer (D-N.Y.), the Senate minority leader, said on the Senate floor on Wednesday. Schumer also called for a special prosecutor for the Russia investigation, to which Senate Majority Leader Mitch McConnell (R-Ky.) refused.

In his first public comment on Comey’s firing, Trump told White House reporters on Wednesday that he made the decision because Comey “was not doing a good job.”