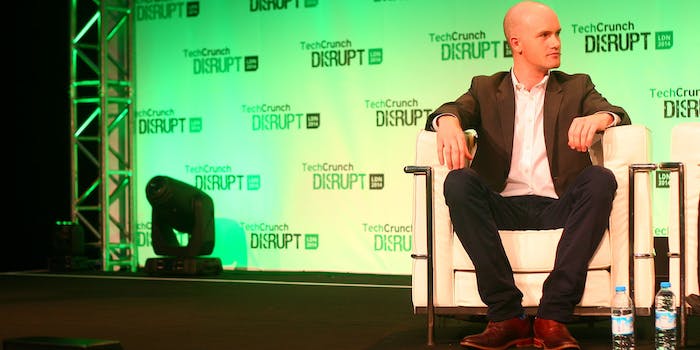 Following Coinbase’s recent expansion to 18 European countries, CEO Brian Armstrong took to the stage at the TechCrunch Disrupt conference in London to expand upon his vision to provide cryptocurrency infrastructure to the entire continent.

Likening the current Bitcoin ecosystem to the early days of the Internet, Armstrong told attendees that the lack of easy access to cryptocurrency products is holding back progress—and that Coinbase intends to be the one to solve this.

The CEO and co-founder was bullish when questioned about the price slump that Bitcoin has experienced in recent months. The digital currency’s growth is better understood as a series of “bubble periods” producing ever-higher plateaus. Even so, he said, Coinbase has enjoyed increasing signups, deposit growth, and real commerce (rather than currency speculation), all despite the price drop.

Furthermore, ten $1 billion-plus businesses have begun accepting Bitcoin in the last year, starting with Overstock. Armstrong took pains to point out that Coinbase was the company that closed 9 of those deals.

Armstrong characterized Bitcoin’s infrastructure and ecosystem as existing in a state similar to the Internet in the late 1990s. Use of the cryptocurrency largely mirrors broader tech adoption—focused around hubs like New York, Berlin, London, and San Francisco—with ordinary people facing difficulties that recall the complexities of web hosting “back in the early days of the Internet.”

The move by Coinbase over the last month to expand into 18 European countries, including Span, France, Ireland and Denmark, is part of efforts to lay the groundwork on the continent “so the rest of the ecosystem can take off.” Armstrong admitted, however, that more imminent commercial pressures may have precipitated the move. While Europe, as the second-largest single market after America, is fertile ground for an expansion, there are also increasing numbers of clones encroaching on Coinbase’s turf.

Armstrong’s comments echoed those made by investors earlier in the day: Saul Klein, a partner at Index Ventures, described the European technology ecosystem as around 20 years behind America, with younger, smaller companies. However, Klein said, Europe’s tech sector is growing fast. Throughout the two-day conference, speakers have heralded Europe as an exciting, up-and-coming market, even as they criticized the continent’s regulatory regime.

The interview with Armstrong also touched upon the New York “Bit License” proposal to regulate cryptocurrencies, about which Armstrong was diplomatic, despite having published a strongly critical response to the proposals. His company had submitted “constructive criticism,” he said, and he welcomed discussions with regulators. Coinable, he said, was trying to connect with U.S. regulatory agencies to educate them on the issues.

Over the longer term, Armstrong also posited that Bitcoin—and, by extension, Coinbase—could find new markets in the developing world. More people around the globe use smartphones than have credit cards, he said, and cryptocurrencies could help these people “leapfrog” conventional financial networks, offering virtual wallets rather than plastic cards as their first foray into digital finance.

Regulatory approaches to Bitcoin will inevitably vary by country and region, Armstrong conceded—much like the Internet itself. While the “free world” offers largely unfiltered access, countries like China will likely be more proactive in trying to control digital currencies. “You might not want to live in those countries,” Armstrong said.