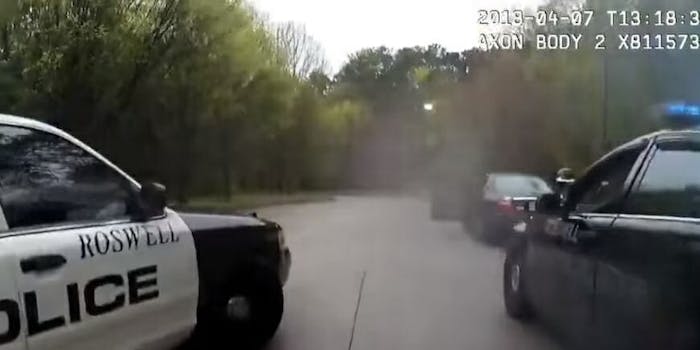 They landed on release, but arrested her anyway.

In a normal world, coin flips are non-threatening enough. They’re for figuring out who pays for dinner, determining football matches, or determining whether Javier Bardem lets you live. But two police officers in Georgia are on administrative leave after using a coin flip app to determine whether to arrest a woman for allegedly speeding.

The motorist, Sarah Webb, was driving to work on April 7 when two female officers pulled her over for allegedly speeding. Footage captured on the officers’ body cameras shows one officer approaching the driver, accusing her of going 80 mph, with Webb apologizing and saying she was late to her job at a salon. The two officers then debated whether to arrest or release Web.

Officer Courtney Brown later admitted to her partner, Officer Kristee Wilson, that she did not have a radar to clock how fast Webb was driving.

The pair of officers sat in their car debating the matter for a short period before opening up a coin toss app and determining that heads meant arrest and tails meant release.

The officers landed on tails, but decided to arrest Webb anyway for reckless driving, leaving the motorist sobbing in the back of the police vehicle.

“This really was all over nothing. It was a game,” Webb said in an interview with ABC.

Both officers are now on administrative leave, and all charges against Webb were dropped.

“I was appalled to believe that a police officer would let a flip of a coin be a deciding factor on whether or not to issue somebody a citation, or more importantly to take somebody into custody,” Roswell Police Chief Rusty Grant said to ABC.

The Roswell Police stated the investigation into the matter is still ongoing and will include a review of past actions made by Brown and Wilson.