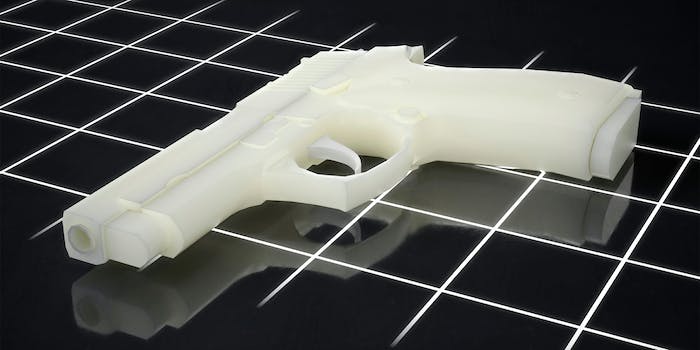 Cody Wilson battled the Department of Justice over the right to 3D print guns. And won.

Five years ago, Cody Wilson successfully fired a round on a 3D-printed gun. He and members of his nonprofit, Defense Distributed, uploaded the design file and eight others to a website called DefCad so that anyone could download and 3D-print their own weapon. Unfortunately the move, seen by Wilson at the time as a way to initiate “social change and radical change,” triggered some unexpected consequences: The U.S. State Department claimed Defense Distributed may have violated U.S. trade law by making firearm schematics available to foreign nationals.

Thus began what would become a years-long battle with the Department of Justice that finally ended last week. On July 10, Wilson revealed that government lawyers finally settled the suit, agreeing to exempt “the technical data that is the subject of the Action” from legal restriction. That is, Wilson and Defense Distributed are free to upload designs of working firearms to the internet; those files are legal to own and share, and the resulting weapons are legal to own.

While the legal challenges are over for Wilson, he now has a new set of difficulties to face as he builds DefCad back, tries to rebuild its community of people, bring in industry stakeholders, and prevent any sort of intellectual property war from happening.

Wilson spoke not with defeatism, but with a calm and an air of exhaustion. With good reason: Three years ago, it was “pretty clear” he wasn’t going to win against the DoJ. There were years of evasive decisions, but nothing definitive—no relief. “I thought at best I’d get some kind of noble failure, and that would give me the moral authority to do the next thing,” he said.

Wilson’s battle with the State Department was essentially one of free speech versus Cold War-era firearms regulations. While Wilson and Defense Distributed did everything in their power to ensure their 3D-printed weapons followed U.S. firearm law (including acquiring a federal firearms license and including a thick steel bar in the handle of weapons, per the 1998 Undetectable Firearms Act), the State Department saw the operation as a violation of the International Traffic in Arms Regulations. ITAR is a set of trade laws that require exporters to get government approval before exporting firearms, and the State Department included blueprints and designs as part of ITAR’s broad regulatory domain. It wasn’t a battle of whether citizens had the legal right to download and 3D print their own guns—it was a question of whether foreign nationals downloading such plans was considered an export, or whether these CAD files fell under free speech and the public domain.

The Department of Justice’s settlement wasn’t technically in his favor, Wilson said—but it did grant him everything he’d wanted out of the case, so in essence, it’s still a legal victory for a man once selected as one of Wired’s 15 most dangerous people in the world. (And for many, the decision was not surprising: Export lawyer Robert Clifton Burns told Ars Technica that a change in these laws was inevitable, because saying that “putting something on the Internet is an export to the entire world is ridiculous.”)

Now, he has a chance to resume his original passion, but it won’t be his day job. Wilson owns a manufacturing company in Austin, Texas, so he needs to run that operation to pay the bills while simultaneously working on the software company he was forced to put on hold for half a decade. DefCad goes back online Aug. 1, and the team already has some files ready to upload, as well as people it’s invited to participate. The site, which is free to use, will be library portfolio-style, where users can search files by tag or category. The files themselves, too, are free to download.

Critics and gun control activists are rightfully alarmed by the settlement, which could give domestic abusers and felons easier access to firearms that background checks would typically prevent. It’s also seen as a strategic move by the Trump administration to further its quest to deregulate and increase access to firearms.

Wilson, who’s been dubbed a “technoanarchist,” says that while he doesn’t want people to do bad things, he’s “kind of a fundamentalist when it comes to openness of speech and information.” With DefCad back online, he’s also excited to see how people will continue to experiment with 3D printers and to see what “interesting composite weapons” people have yet to imagine. He also sees the platform as educational, allowing people to study gun mechanisms and functions and use that knowledge to build new things.

While the legal battle over DefCad and the idea of 3D printable guns in the U.S. is now settled, it’s a controversial topic that’s unlikely to disappear from the public eye. For Cody Wilson, it means he can finally get back to business.