The developers are working on at least two apps right now.

A small community of programmers have started organizing across a range of platforms in order to get Jill Stein elected president of the United States. Much like their predecessors working for the Sanders campaign, Coders for Jill are building apps designed to get the vote out for the Green Party in November—working on Reddit, Slack, and GitHub to put their collective efforts to their best use.

The developers are working on at least two apps right now. One is being designed as a means to help disillusioned Democratic Party members change their party affiliation while promoting the Green Party as a positive alternative. According to a Google Doc being shared on the group’s Slack channel, the app would provide instruction on how to leave the Democrats for each state, allow a user to indicate to others that they left, and offer guidance on registering with the Green Party.

The second app in production is intended to “gamify” the volunteering experience. Users would accrue points and achievements for activities benefiting the Stein campaign, such as phonebanking, sharing information on social media, donating money, and attending events. High-performing users would win prizes, like campaign merchandise, or an autographed photo of Jill Stein. 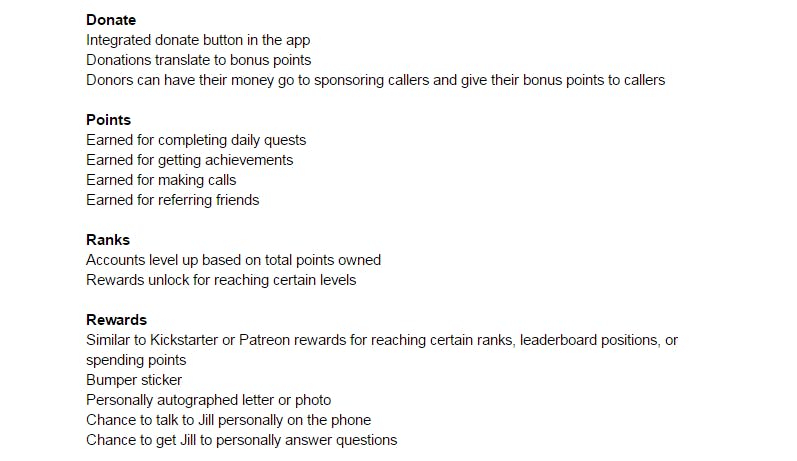 Coders for Sanders were able to create a number of apps and websites for the benefit of their candidate, like Ride With Bernie, a ridesharing service for Sanders campaign events, and Bernmojies, which let users share animated Bernie Sanders faces in text messages. With 98 days left until elections, Coders for Jill don’t have much time to recreate Coders for Sanders’ success. Clinton’s team has already overtaken their efforts, releasing their own highly-polished gamification app in an effort to reach younger voters.