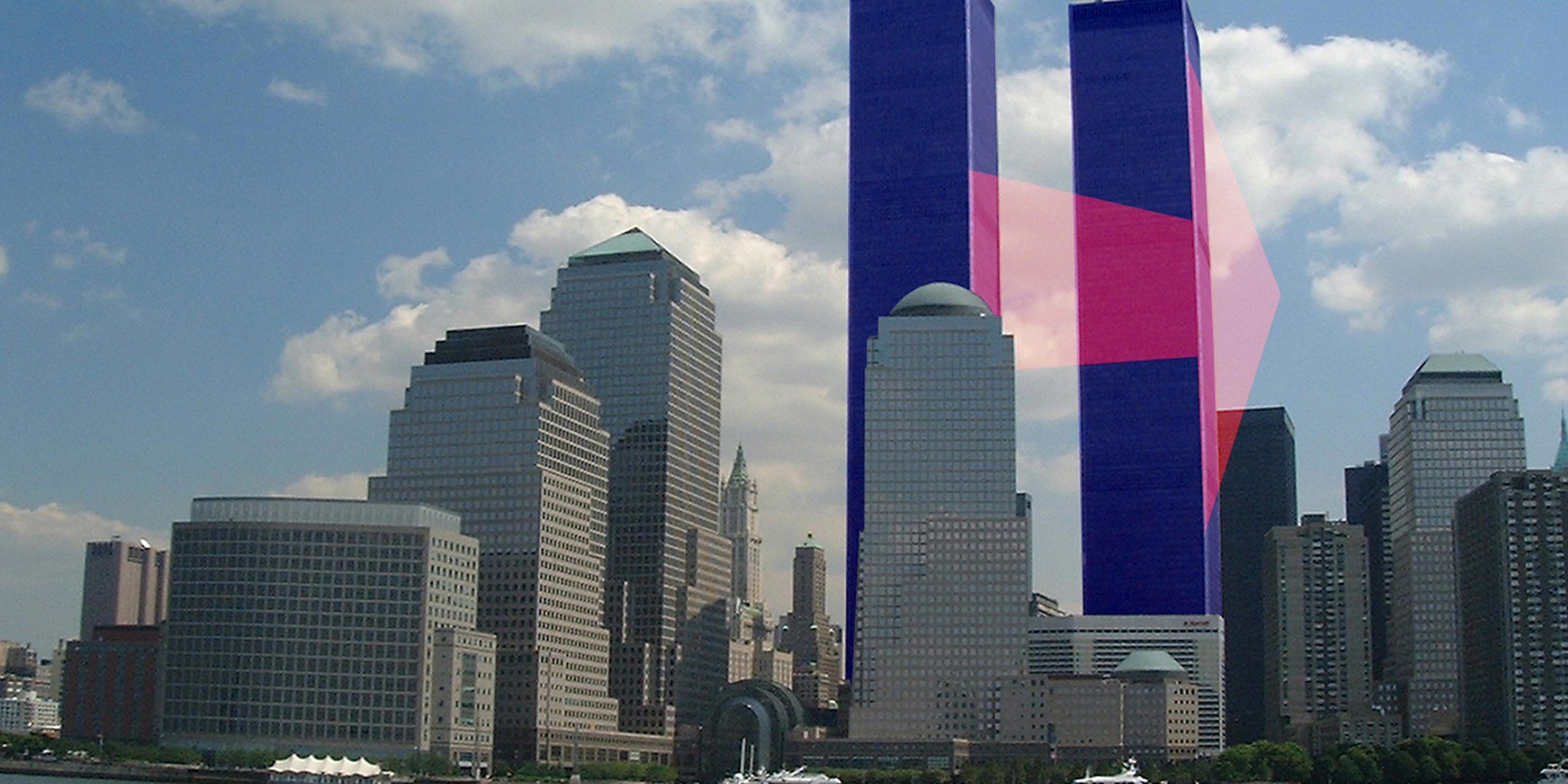 Is Clinton’s campaign logo a nod to this 9/11 conspiracy?

The fringe conspiracy theorists are in a frenzy.

Along with officially announcing her run for the White House in 2016 on Sunday, Hillary Clinton’s campaign rolled out its online presence with a new website, campaign video, and logo.

The Internet immediately and predictably convulsed and Twitter was awash with haters picking apart the semiotics of the presidential candidate’s symbol.

A blocky blue H with a red arrow as the cross bar, the image is an obvious update of her 2008 campaign logo using contemporary design trends, but the Web has gone haywire, accusing the emblem of everything from plagiarism to hiding a hidden meaning.

Despite the fact that we live in the West where we read left to right and so right represents the future in any visual representation of time and is therefore the direction symbolic of progress, many joked, speculated, or seriously worried that the right facing arrow was alluding to Clinton adopting conservative ideology in order to garner votes.

And beside the fact that neither arrows nor the color red are trademarkable (unless you’re McDonald’s) a torrent of tweets excoriated the logo’s similarity to the use of negative space in FedEx’s brand image. Even Wikileaks joked that Clinton’s campaign had stolen its steez.

Pat Mullin tweeted, “If you turn the Hillary Clinton campaign logo sideways and drive over it with your car, you get a speed boost.”

And Nick Horowitz joked, “My first reaction to the Hillary logo is that it looks like it belongs on a 90s Nautica windbreaker.”

Comparisons were made to the Shutterstock image and people commented that no matter how bad Clinton’s campaign symbol is, it’s better than Rand Paul appropriating the Tinder logo or Ted Cruz using a burning flag.

But perhaps the craziest criticism came with conservative and conspiracy theorists’ outlandish claims that the design is an allusion to a plane striking the twin towers.

Hillary opponents have turned her logo into the twin towers because of course they have pic.twitter.com/Gqpp2SvIgS

(After which Nuzzi joked: “Is it wrong to say this is an improvement?”)

Twitter user Matt Rivera observed that this is the “First new Hillary Clinton logo in 15 years. She’s been using the same theme since her first N.Y. senate run.”

If Clinton would have used this logo when she was campaigning for a senate seat back in 2000, would this theory have more merit or at least be eerier?

Or coming on the heels of so many similar logos, does the derivative design argue for bromidic branding rather than legitimate concern that our first female presidential candidate is giving a brazen public wink to being complicit in the conspiracy to cover up 9/11 as an inside job?

Referring to the popular theory that the temperature at which jet fuel burns would not have been hot enough to melt the steel beams supporting the structure and therefore the towers must have been felled by an orchestrated demolition effort, Andy Steele, the head of media outreach for Architects and Engineers for 9/11 Truth told the Guardian, “Our focus is on the science of the controlled demolition that day. We don’t get into conspiracy theories.”

The Guardian also spoke to owner and editor of 3DOT news, Chris Humphrey, who said of his visual remix of the logo:

“After seeing the Hillary Clinton campaign logo on Sunday I was struck by its likeness to many photos the 9/11 WTC terror attacks. Coupled with the Clinton regime’s many missed opportunities to prevent the 9/11 terror attacks in the years leading up to 9/11/2001, I found the campaign logo to be so ironic in design. With the addition of a plane and an antenna, my Photoshopped version of the Clinton logo transformed it into quite the indictment of Clinton policy and the costly wars we have fought since then.”