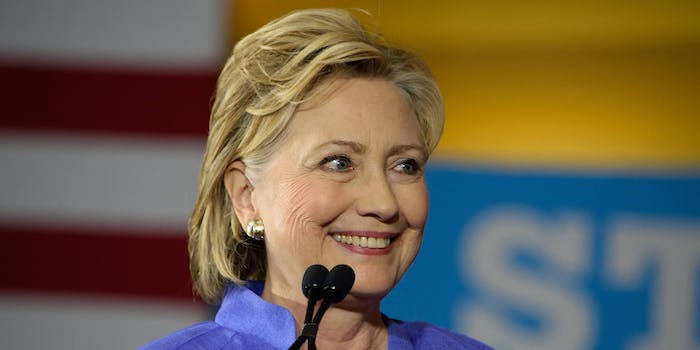 Can Citizens United be overturned in 30 days or less? Hillary Clinton thinks so.

Hillary Clinton is set to make a bold pledge on Saturday. The presumptive Democratic nominee will be addressing the Netroots Network convention via a special video during the event’s closing keynote. Her message? Give Clinton 30 days from taking office and she’ll repeal Citizens United.

The former Secretary of State is seeking a constitutional amendment to get the job done, adding that she “will fight for other progressive reforms, including small-dollar matching and disclosure requirements.”

“I hope some of the brilliant minds in this room will seek out cases to challenge Citizens United in the courts,” Clinton states. In addition to honing in on campaign finance reform, the candidate vowed to nominate Supreme Court justices sympathetic to the cause against Citizens United, who “understand that this decision was a disaster for our democracy.”

Such a justice may not be hard to find given public sentiment towards the SCOTUS ruling, which expands campaign donations to corporations, labor unions, and other for-profit ventures. According to a Sept. 2015 Bloomberg Politics poll, over 80 percent of Democrats and Republicans polled are against Citizens United.

In an apparent effort to court Sanders supporters, who’ve long been critical of donations the Clinton campaign has received throughout her campaign, Clinton also promised to issue an “executive order requiring federal government contractors to fully disclose all political spending.”

“I know that many of the people in this room supported Sen. Sanders in the primary,. I’m looking forward to hearing from you, learning from you, and working with you,” Clinton concludes in the video.