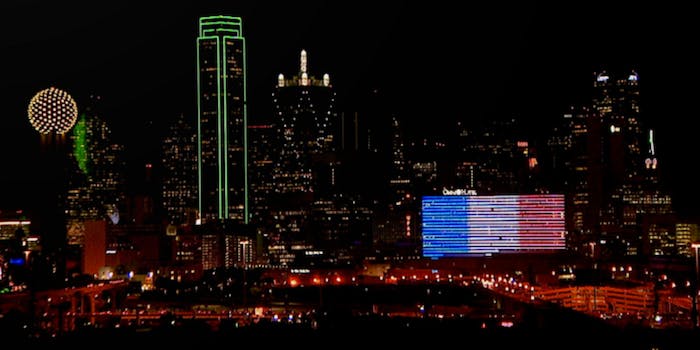 Cities around the world light up to support Paris after attacks

Cities around the world are turning big buildings and major events red, white, and blue in tribute to Paris, which came under siege on Friday night from terror attacks that killed at least 129 people.

The National Anthem is playing, but tonight our thoughts are with Paris. 🇫🇷 #CapsFlames #PrayersForParis pic.twitter.com/AVMIs81yWf

New York & Dublin are 2 of the first cities to rally around #Paris 🇫🇷❤️ pic.twitter.com/7mMWiQaNE5

Omni Hotel in Dallas is displaying French flag in solidarity with France. pic.twitter.com/vq7X5xrVie

The tributes follow statements from world leaders including President Barack Obama, who on Friday evening condemned the attacks and pledged support for the people of France.

Update 4:53pm CT, Nov. 17: The official total number of casualties from Friday night’s attack has fallen from a high of over 150 to at least 129.

Correction: An earlier version of this story included a tweet that stated that the Empire State Building was lit up in the colors of the French flag Friday night. That image was from January, after the Charlie Hebdo attacks. We regret the error.