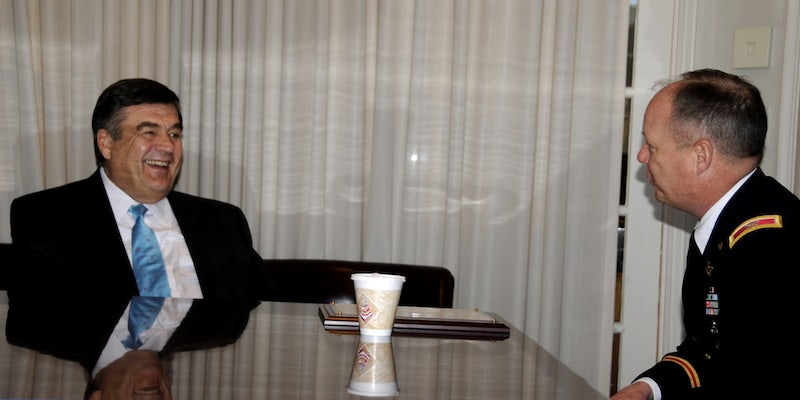 CISPA, the Internet's most-hated cybersecurity bill, has risen from the grave yet again.

Capitalizing on the recent Sony hack, which got the country frantic about cyberattacks, one of the two original authors of the Cyber Intelligence Sharing and Protection Act, Dutch Ruppersberger (D-Md.) said he will introduce that bill for a third time on Friday.

“The reason I’m putting bill in now is I want to keep the momentum going on what’s happening out there in the world,” Ruppersberger told the Hill.

More than other cybersecurity legislation introduced in recent years, previous versions of CISPA were resoundingly condemned as “a privacy nightmare” by privacy advocates. They advocated a temporary suspension of privacy laws when an American system is being hacked and wants to immediately share what they’re seeing with law enforcement.

Both those iterations of CISPA stood as an expression of the Republican-led House’s point of view, and never stood much chance of passing. The Democrat-held Senate had their own cybersecurity bills, like the Cybersecurity Act. They garnered a better reception from privacy advocates but also never went anywhere.

President Obama vowed to veto CISPA both times it passed the House. But this time could be different. Those two times, he expressed a hope that the Senate could work out a compromise that the House could agree on. But now, with Republicans controlling the Senate, he may be more willing to back down.

Ruppersberger is without his longtime partner in CISPA, former Michigan Rep. Mike Rogers, a Republican who headed the House Intelligence Committee. It’s not clear at the outset that Ruppersberger had gathered much support.

Representatives from Ruppersberger’s office were unable to immediately respond to the Daily Dot’s request for comment about potential privacy protections in this version of CISPA. But the congressman doesn’t have a great track record: In the last version, he touted the fact that he asked the ACLU for privacy advice. ACLU lawyers told the Daily Dot that while it’s true they spoke with Ruppersberger, he didn’t include their suggestions.