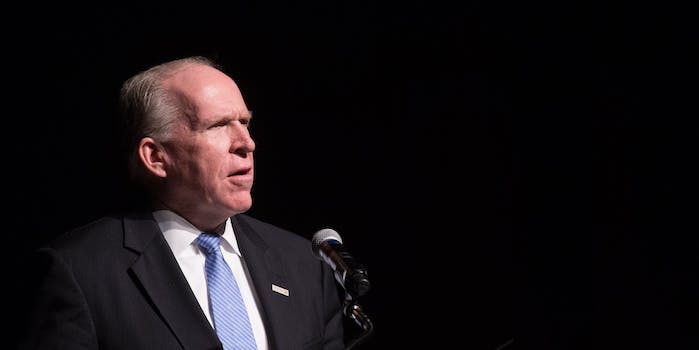 Regardless of the orders he receives, CIA Director John Brennan says he will not resume the practice of waterboarding terrorism suspects during interrogations.

Brennan’s remarks about waterboarding—pouring water over a cloth covering the face of a restrained prisoner, producing near suffocation and a sensation similar to drowning—came as he was asked on Wednesday about whether the use of torture had made the nation any safer.

“They’ll have to find another director.”

“There are voices now in America that are crying out to go back to that,” Bruce Riedel, director of the Intelligence Project, inquired during an hourlong talk with Brennan at the Brookings Institution in Washington D.C.

“I can say that as long as I’m director of CIA, irrespective of what the president says, I’m not going to be the director of CIA that gives that order,” Brennan replied. “They’ll have to find another director.”

Although the reference was apparent, neither Riedel nor Brennan mentioned Donald Trump by name. Brennan, who in the past has spoken openly against the use of “enhanced interrogation tactics,” or EITs, as the Central Intelligence Agency calls it, said he would rather resign than oversee the restoration of torture in the U.S.

Trump, whose nomination at the Republican National Convention next week is all but assured, is a proponent of torture and has on more than one occasion promised to reinstate its use if elected president.

Trump has further indicated that, if elected, waterboarding would not constitute a methodological ceiling, but rather a jumping off point for counterintelligence programs handling high-level terrorist suspects.

“I would absolutely authorize something beyond waterboarding,” he told George Stephanopoulos during a Feb 7. interview on ABC’s This Week.

The CIA’s detention-interrogation program, Brennan argued, was “instrumental” in keeping the U.S. “safe” in the aftermath of the Sept. 11, 2001, terrorist attacks. However, mistakes were “absolutely” made, he said. “My view is that, despite others who may argue differently, you cannot establish cause and effect between the application of these EITs and any reliable information, credible information, that came out from these individuals.”

During his first presidential campaign, President Obama ran on rolling back the interrogation and detention tactics of the George W. Bush administration. While the Guantanamo Bay detention camp remains operational—much to the dismay of Obama supporters and the White House itself—the president made great strides in accomplishing that promise through Executive Order 13491. Signed by Obama two days after assuming office, the order banned the use waterboarding and other controversial CIA tactics the president deemed torturous.

According to a 2005 Justice Department legal memo, CIA interrogators employed the now-illegal water-torture technique up to 266 times on two prisoners alone. Abu Zubaydah, captured in Pakistan in March 2002, was waterboarded at least 83 times. He remains imprisoned by the U.S. military at Guantanamo Bay, though he has never been charged with a crime.

Likewise, no U.S. officials involved in the use of torture have faced prosecution.