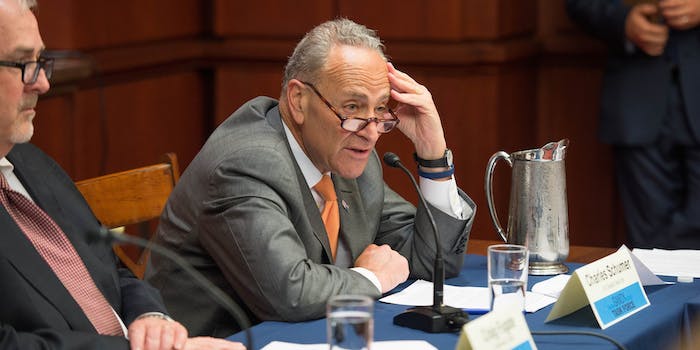 Senate Majority Leader Mitch McConnell has a busy week ahead of him. The Senate is scheduled to hold hearings on a slew of Cabinet nominations from President-elect Donald Trump, and even though the director of the non-partisan Office of Government Ethics is greatly concerned that many of these nominations will be debated without complete financial disclosures or ethics reviews, McConnell doesn’t seem to mind.

“All of these little procedural complaints are related to their frustration at having not only lost the White House, but having lost the Senate,” McConnell said Sunday on CBS’s Face The Nation. “I understand that. But we need to, sort of, grow up here and get past that.”

The problem with that statement is that McConnell demanded the same kind of reviews for the Cabinet nominees that Barack Obama made when he was inaugurated in 2009. And Democratic leader Chuck Schumer has the letter from McConnell that proves it.

Schumer just had to make a few simple changes to the original letter, dated Feb. 12, 2009, and send it back to McConnell on Twitter.

In 2009, Min Ldr McConnell gave Maj Ldr Reid his pre-recs for @POTUS nominees. They're almost exactly like @SenateDems requests for 2017.

Our requests are eminently reasonable, shared by leaders of both parties. I'll return this letter to @SenateMajLdr with the same requests. pic.twitter.com/IMT7ZtJFjV

As the Atlantic notes, eight nominees are scheduled to have their hearings this week, and as of Monday afternoon, four of them—including Education Secretary nominee Betsy DeVos and HUD nominee Ben Carson—haven’t completed certified agreements on how they would avoid conflicts of interest if and when they take office.