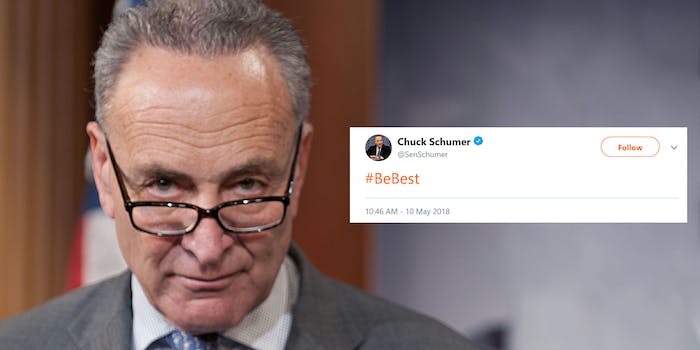 Earlier this week, First Lady Melania Trump launched her new initiative on youth development, which has a special focus on cyberbullying. The irony was not lost on the internet, which pointed out that her husband, President Donald Trump, engages in cyberbullying practically every day.

Like today, when he attacked Senate Minority Leader Chuck Schumer (D-N.Y.) over the Iran nuclear deal.

Senator Cryin’ Chuck Schumer fought hard against the Bad Iran Deal, even going at it with President Obama, & then Voted AGAINST it! Now he says I should not have terminated the deal – but he doesn’t really believe that! Same with Comey. Thought he was terrible until I fired him!

Schumer responded delightfully with the tagline from Melania Trump’s new campaign: “Be Best.”

The internet is a hell swamp every day, but you have to admit, this troll job is a pretty good one.