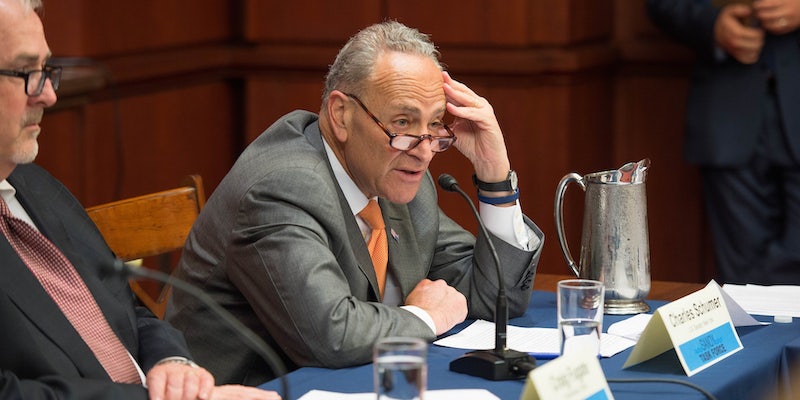 President Barack Obama‘s Iran nuclear deal has stumbled toward the ropes—and it’s a fellow Democrat who threw the punch.

“After deep study, careful thought and considerable soul-searching, I have decided I must oppose the agreement and will vote yes on a motion of disapproval,” wrote Sen. Chuck Schumer (D-N.Y.) in a post published to the website Medium on Thursday evening.

“When it comes to the non-nuclear aspects of the deal, I think there is a strong case that we are better off without an agreement than with one,” Schumer added. He likewise brushed aside any notion that his decision was based on a desire for war, saying he believed that the deal would enable Iran to achieve “dual goals of eliminating sanctions while ultimately retaining its nuclear and non-nuclear power.”

“When it comes to the non-nuclear aspects of the deal, I think there is a strong case that we are better off without an agreement than with one.”

Schumer joins Republican leaders in the House and Senate, as well as a handful of Democrats, who have vowed to derail the deal with a vote in September. If they’re successful, the president will need a majority of Democrats in Congress to sustain a potential veto. An aide in Schumer’s office confirmed to CNN that the senator is willing to vote a second time against the president.

It’s unclear whether Schumer, in addition to opposing the plan himself, will try to whip votes against it, writing only that “each member ultimately comes to their own conclusion.”

Online, Schumer’s decision was met with a firestorm of tweets from apparent Democrats and constituents, who labelled the senator a “traitor” and “warmonger.” Others questioned whether the decision was based on preserving ties with a Jewish base. “He’s scared of losing pro-Israel NY Jewish vote,” tweeted @IDDocHymes. “But as a NY Jew, he’s now lost mine.”

Israel’s prime minister, Benjamin Netanyahu, has been one of the most vocal opponents of the Iran deal, labelling it a “mistake of historic proportions” to the press in July. “Iran will get a jackpot, a cash bonanza, of hundreds of billions of dollars” as a result of the repealed sanctions, “which would enable it to continue to pursue aggression and terror in the region,” he said.

@SenSchumer Wow, I've always voted for you. Speechless. I rarely feel this disappointed in a politician.

.@SenSchumer Lifelong New Yorker and Democrat. Won't ever vote for you again.

@SenSchumer I'm never voting for you again. I will support, contribute and volunteer for your primary opponent. You have no shame. #IranDeal

Schumer, who is Jewish and is known to have close ties to America’s top pro-Israel lobbying group, the American Israel Public Affairs Committee (AIPAC), has reportedly been targeted in his district with multi-million dollar ad buys by groups staunchly opposed to any deal between the U.S. and Iran, including the recently formed American Security Initiative.

.@senschumer Those AIPAC checks are sweet but they'll be of small comfort as you try to sell us out to war.

Some, albeit far fewer in number, thanked Schumer for opposing the plan. “I support you and pray for you as you vote to disapprove the deal,” tweeted @MarelLecone. “I rarely support Democrat socialism,” @AndyBran wrote, “but I will look closely at your policies now!”

At a briefing on Friday, Josh Earnest, the White House press secretary, downplayed Schumer’s defection, as well as that of New York Rep. Eliot Engel, citing at least 12 other members of Congress—seven representatives, five senators—who voiced support for the agreement. “We’ve gotten substantially more votes in support of the deal,” Earnest said.

The White House has waged a massive lobbying effort to whip up support for the plan. President Obama spoke for an hour on Wednesday at American University, where he linked critics of the accord to supporters of the Iraq invasion, a decision he called the result of a “mindset characterized by a preference for military action over diplomacy.”

“It’s those hardliners chanting ‘death to America’ who have been most opposed to the deal,” Obama added. “They’re making common cause with the Republican caucus.” Senate Majority Leader Mitch McConnell later derided the president for his “bizarre and preposterous comments.”

“If Iran’s true intent is to get a nuclear weapon, under this agreement, it must simply exercise patience.”

In his 1,600-word letter, Schumer addressed the deal in sweeping terms, postulating that Iran’s “brutal, theocratic dictatorship” might outlast the agreement.

“If Iran’s true intent is to get a nuclear weapon, under this agreement, it must simply exercise patience,” wrote Schumer. “After 10 years, it can be very close to achieving that goal, and, unlike its current unsanctioned pursuit of a nuclear weapon, Iran’s nuclear program will be codified in an agreement signed by the United States and other nations.”

Addressing those limitations, President Obama noted on Wednesday that the SALT agreement, which was the first established between the U.S. and Russia to limit the number of nuclear missiles in their arsenals during the Cold War, lasted only five years; the subsequent START treaty of 1991, was limited to 15 years, he said. Both treaties were products of Republican administrations—those of Richard Nixon and George H.W. Bush, respectively.

“If 15 or 20 years from now, Iran tries to build a bomb,” the president said, “this deal ensures that the United States will have better tools to detect it, a stronger basis under international law to respond, and the same options available to stop our weapons program as we have today, including, if necessary, military options.”