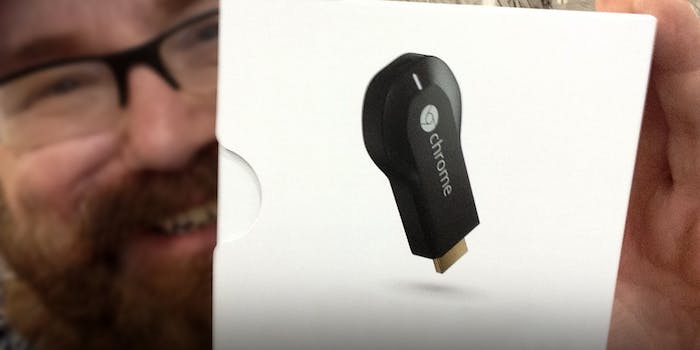 Google’s Chromecast has big plans for how you watch TV

Google’s fortunes in the TV streaming space have done a 180.

After struggling with a few iterations of a separate set-top box called Google TV, the company has hit paydirt with its Chromecast streaming stick and is planning to release a new version. At a recent conference Google Vice President of Product Management Mario Queiroz shared some impressive numbers related to Chromecast and hinted at its future direction.

Quiroz said that Chromecast, released to consumers in July 2013, has been “tapped” 650 million times. Tapping is how users activate the application and send content from Chromecast-enabled consumer devices to their television sets using the small HDMI-based accessory. The Google executive added that there are now 6,000 developers and 10,000 applications in the pipeline.

Chromecast may be poised to play a key role not only in Google’s television strategy, but also become a valuable medium to deliver and show non-video content on the big screen. The recently released Chromecast add-on, Backdrop, allows users to send images from their devices and new photo apps to their TV screens. As Quiroz pointed out, most people watch television five hours a day so there is an opportunity to use those giant, pixel-rich monitors as an information station while video delivery is idle. Google plans to release a software development kit to allow developers to build apps that take advantage of this delivery path.

Quiroz hinted that Backdrop could be a piece of Google’s connected home strategy with its Nest Labs products having the capability to show room temperature and other household data on the television screen.

While Quiroz said the second version of Chromecast will include more hardware capabilities, such a statement is possibly a misdirection of where the product is headed. With the number of cloud TV services entering the market (Dish, Sony), Chromecast is an ideal vehicle to be the bridge that allows consumers to stream these new services from desktop or mobile to their big screens. It is not a stretch to imagine these new cloud TV services, as well as the likes of HBO and CBS, including a Chromecast stick with each subscription. That said, Google will need to compete in that market with Roku, which, according to reports in early 2014, shipped eight million boxes and streaming sticks to U.S. consumers.

Also in the new version, Chromecast will need to add functionality to its SDK to improve its on-screen capabilities and interactive features. Google will need to go beyond the basic and build in advanced search and social media interactivity.

None of these new plans address the issue of revenue. Certainly, Google has sights set on income beyond the $35 retail price for each sale of the small hardware accessory. There are a few possibilities that could wind up as part of any future Chromecast product line. Since advertising is still king at Google, could the search giant use the supporting streaming ecosystem to serve ads to the big screen? If so, those ads would have to be in addition to existing ad units in the streams. While replacing existing ad units in streaming media is technologically possible, it would hurt Google in the advertising and marketing community.

In the world of online shipping, streaming interactive product pages filled with video to the big screen for couch-based commerce is another possibility. Google Wallet (stored on the desktop or mobile device) is the perfect tool to facilitate purchases in this new, hybrid medium.

Given the creativity of developers, there’s more where that came from with partnerships between broadcasters, advertisers, social media networks, and other visionaries. Still missing from Google’s overall streaming strategy is the original content piece—the element that plays in Amazon Fire’s favor. It’s time for all those investments in YouTube’s creators to pay off.