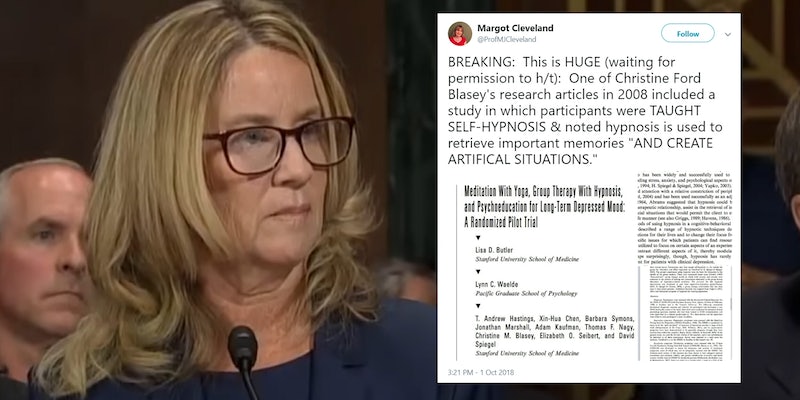 The attempts to discredit her are getting more and more far-out.

Since entering the public eye with her accusation that Supreme Court nominee Brett Kavanaugh attempted to rape her in 1982, Dr. Christine Blasey Ford has been the subject of innumerable hoaxes from dubious far-right sources.

Ahead of her hearing in the Senate on Sept. 27, numerous false reports were rampant throughout the internet. They include the debunked conspiracy theory that she previously attempted to pin the same sexual assault charge on Neil Gorsuch, the false assertion that she is a prominent Democratic donor, and the lie that her high school yearbook is full of racist comments.

Rather than resulting in his quick confirmation, the hearing led to a new FBI investigation into Kavanaugh’s behavior—which was forced by Democrats and acquiesced to by wavering Republicans.

While many on the right said a week would allow more “fake” accusers to come forward against Kavanaugh, an additional week for the FBI to look into the allegations really means seven more days for hoaxers and fraudsters to dig up or invent more nonsensical smears against Ford.

And the newest ones are far-out.

Hoax: Dr. Blasey Ford worked on a research project in 2008 that studied how self-hypnosis can be used to create “artificial situations”—such as a rape attempt that never happened.

On Oct. 1, a conservative activist and blogger for conservative outlet The Federalist tweeted a “HUGE” accusation, using the abstract of a paper that Blasey Ford worked on at Stanford.

BREAKING: This is HUGE (waiting for permission to h/t): One of Christine Ford Blasey's research articles in 2008 included a study in which participants were TAUGHT SELF-HYPNOSIS & noted hypnosis is used to retrieve important memories "AND CREATE ARTIFICAL SITUATIONS." pic.twitter.com/11n1JVnArM

Getting Dr. Blasey Ford’s name wrong, the tweet alleges that she took part in “a study in which participants were TAUGHT SELF-HYPNOSIS & noted hypnosis is used to retrieve important memories “AND CREATE ARTIFICAL [sic] SITUATIONS.”

Clearly, the implication was that Dr. Blasey Ford had either hypnotized herself to create a false situation where Brett Kavanaugh attacked her, or put herself in a position to be “highly suggestible and easily subject to memory contamination.”

Or as one right-wing blog put it, “the obvious takeaway is that a woman tasked with retrieving decade-old memories was also associated with a memory and hypnosis project.”

The theory took off, getting over 3,000 shares within hours, and even caused its creator to tweet an additional statement that she wasn’t accusing Dr. Blasey Ford of willingly creating the accusation, but merely of using “self-hypnosis to create alternative scenarios to treat her anxiety & PTSD” which “creates [the] risk of false memories.”

2/ memories retrieved during hypnosis are more suspect and more likely to create false memories. And if Ford used self-hypnosis to create alternative scenarios to treat her anxiety & PTSD, that creates risk of false memories. Ford's participation in study shows she KNOW both

The reaction on Twitter to this theory was savage, with a number of experts pointing out that Dr. Blasey Ford was one of eleven different authors of the study, and that the study is actually about treating depression using hypnosis to create hypothetical situations. It’s not about retrieving memories, nor about “creating” memories. This isn’t even what Dr. Blasey Ford studied at Stanford.

It would also be deeply unethical for a research paper writer to be a subject in their own test, and there’s no indication Dr. Blasey Ford has ever hypnotized herself, or that she knows how.

Hoax: Dr. Blasey Ford is under investigation by the FBI for perjury.

The source of this is a tweet from a right-wing radio host, posted on Sept. 30, racking up 25,000 retweets since then.

BREAKING: Multiple sources now telling me 3 additional investigations are about to open:

It actually makes three assertions, backed up “multiple sources”—that Blasey Ford and her attorneys are under investigation, and that Sen. Dianne Feinstein (D-Calif.) is also being investigated.

There is no indication, at least not in the days after this tweet was posted, that any of these supposed “investigations” are taking place.

In fact, the FBI actually expanded its look into the first two accusations against Kavanaugh, with moderate Republican senators concerned over the narrow purview of the initial FBI witness list.

This rumor started floating around right around the time of the Senate hearing, getting boosted in a couple of tweets that went viral; and took off for good in a Sept. 29 tweet from a right-wing political strategist, which got over 7,000 shares and came complete with an incomprehensible diagram.

So is Ford related to Peter Strzok, the notorious FBI agent who exchanged texts declaring that he had an “insurance policy” against Trump? Is there some kind of Blasey-Strzok nexus devoted to destroying the Trump administration by any means necessary—including colluding together to create false allegations?

According to Snopes, which ran down the “relationship” between Blasey Ford’s brother and Strzok’s sister-in-law, hardly.

For one thing, Jill Strzok, the supposed sister-in-law to Peter Strzok, is actually his second cousin by marriage. Beyond that, the two don’t actually work in the same office (in fact, they work two time zones away from each other), and don’t have the same job. It’s conceivable they’ve never actually met.

OMG shocking my neighbor's cousin twice removed once met Matt Damon who knew his father's uncle who once walked by Trump Tower whose postman who lived in the same country as Peter Strzok! Conspiracy.

Like many “X degrees of separation” conspiracy theories, there’s no real reason given by the hoaxers that these connections are important, only that they exist, and matter solely because they exist.

Why would it matter that Ford is connected through two people who’ve never met to an FBI agent that she’s also likely never met? What does it mean?

In this case, it means nothing.

All told, these three hoaxes have been shared nearly 40,000 times, sending waves of misinformation pinging back-and-forth in an endless cycle that paints Ford not as a potential victim of a crime, but as a plotter in a vast conspiracy to destroy Brett Kavanaugh.