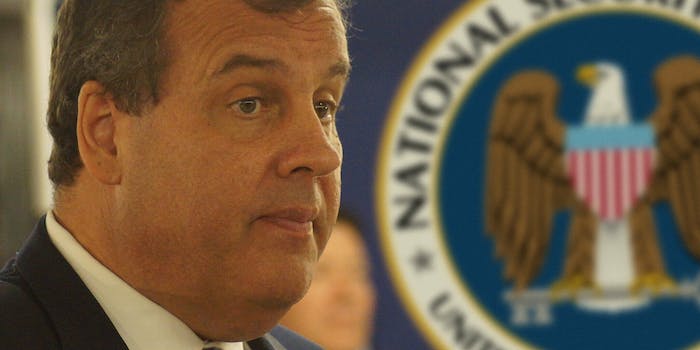 Christie is unapologetic in his support for NSA mass spying.

The New Jersey governor criticized lawmakers for ending a National Security Agency bulk phone-records collection program by passing the USA Freedom Act in June. The NSA can still collect this phone metadata—information about the calls, but not call audio—through an executive order, but Christie said that the closure of the more publicized program was a threat to national security.

“The end of the metadata program has made America weaker and more vulnerable,” said in a Facebook post. “The San Bernardino terrorist attack should prove to everyone just how exposed we are as a nation. If Republicans in Congress really want to do something to protect American families, they should fight for the restoration of the metadata program and not take no for any answer.”

Christie declined to mention that a federal appeals court ruled in May that the metadata program was never authorized in the first place. The government had claimed that it fell under a section of the USA Patriot Act, the controversial 2001 spy bill, but the court rejected that argument.

Christie, a former U.S. Attorney in the George W. Bush administration, found himself well positioned to capitalize on the 2016 campaign’s shift to national-security issues after the Paris terrorist attacks. He has attempted to play up his prosecutorial experience under the previous administration as a sign that he is ready to be commander-in-chief. But in dismissing civil-liberties concerns about warrantless mass surveillance, Christie has earned the ire of opponents like Sen. Rand Paul (R-Ky.), the presidential field’s leading privacy advocate.

On Monday, Paul, one of two presidential candidates to vote for the USA Freedom Act (along with Texas senator Ted Cruz), slammed Christie for being “very willing to give up your liberty for a false sense of security” in an interview on MSNBC’s Morning Joe.

“Is there any limit to how much liberty authoritarians like Christie are willing to give up?” Paul wondered aloud. “Will it have been worth it if we’re no longer who we were … in the process of defending the country?”