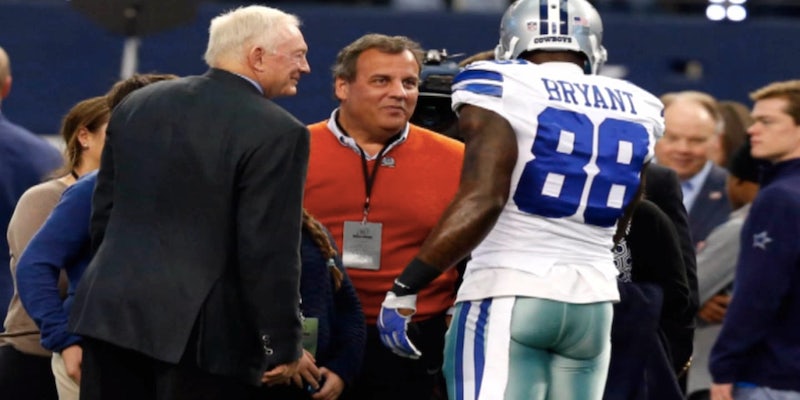 The jolly fellow in the orange sweater who appears to be having a bromance with Dallas Cowboys owner Jerry Jones is rewriting the definition of foolhardy politician.

New Jersey Gov. Chris Christie, no doubt armed with hand-warmers for the Cowboys game in Green Bay, Wis., on Sunday,  will continue his bandwagon ride as the playoffs roll along, leaving angry fans, nosey reporters, and social media pundits in his wake. Sunday’s forecast calls for a high of 21 for the game, which is being termed Frozen Tundra II. (The first one, made historic by the late John Facenda‘s narration over the NFL Films video, took place 48 years ago.)

Logic dictates that Gov. Christie, born in Newark, would be a fan of one of the two teams geographically proximate to his hometown, namely the New York Giants and Jets. If he wanted to be a true diplomat and distinguish himself as the leader of a state that offers bedroom communities to two of the four largest U.S. cities (New York and Philadelphia), he might toss the Eagles into his fan folder, but that’s never going to happen.

And that’s where the kerfuffle begins.

During the Dec. 14 game between the Cowboys and Eagles, with the NFC East title on the line, Christie was seen next to his BFF Jones, and even when the game was in doubt, the governor assured the billionaire owner that things would be just fine. But, in an unintended slip of the tongue, Christie called Philadelphia sports fans “the worst in America.”

Social media had a field day with that remark.

Chris Christie slams Philadelphia Eagles fans as the “worst.” But retracts his statement by eating his own words.Or was that a cheese steak?

half of nj are eagle fans. governor thinks they're "the worst." http://t.co/e3QVojnWvI

Undaunted, Christie appeared at Jones’ side during wild card weekend, when the Cowboys—thanks to some hapless refereeing—beat the Detroit Lions. Now under the media microscope, Christie was taken to task for his rather awkward celebratory hug with Jones after the victory.

On his ride to sports infamy, Christie has picked up some interesting critics. On ESPN, singer Kinky Friedman, himself a politician, told Bob Ley that the relationship between Christie and Jones was “the most latent homosexual relationship since Sherlock Holmes and Dr. Watson.”

A bit more serious in nature are those who went the extra mile to do some serious reporting about the Christie-Jones friendship.

The Wall Street Journal reported that the two men became close in the summer of 2013, after a company in which Jones had an interest received a contract from the New Jersey Port Authority. While there is no suspicion of impropriety over the Port Authority bid, many have questioned whether Christie pays for his own transportation and tickets to the game.

As governor, Christie earns $175,000 per year, but combined with his wife’s salary as a financial advisor, their gross salary for last year was somewhere in the neighborhood of $700,000. One would assume he could afford to pay his own way to the game and even have some money left over for a few beers.

On the more thoughtful side, the New York Times speculated that Christie’s bro-hug with Jerry Jones and his faux-devotion to the Cowboys were little more than a way to woo Texas Republicans. Christie will need the support of Texas’ influential and deep-pocketed conservative financiers if he runs for president in 2016. In the 2012 presidential election, Texans contributed three times as much money to Republican candidates as they did to Democrats.

Sunday’s NFC semifinal is interesting in that it pits a team with a tycoon in the owners’ box against the only publicly owned NFL team, the Green Bay Packers. Wisconsin Gov. Scott Walker, another potential 2016 Republican presidential candidate, used Twitter to jab at his New Jersey counterpart.

This is the type of owner I'll be looking to hug after a #Packers win on Sunday: pic.twitter.com/W20LRO5oMM

.@GovWalker don’t worry… there are enough awkward hugs to go around. pic.twitter.com/gFTItWqPVO

Gov. Scott Walker just now: “I think the [Christie] tweet back was almost as awkward as the original hug”