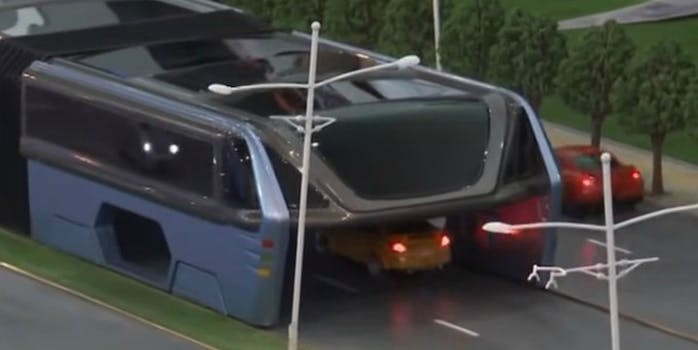 Is this mammoth straddling bus the solution to China’s traffic problems?

While the world waits patiently for Hyperloop, Chinese engineers have provided something of a solution to the enormous traffic jams for China’s intracity roadways. Instead of discussing ways to change driving and buying habits, an intermediate fix was on display at the 19th International High Tech Expo last weekend in Beijing.

It’s an elevated bus that straddles cars that are traversing China’s roadways, and it’s going to be tested in August. Take a look.

Here’s an explanation from Digital Trends:

The electric “straddling bus“ is designed for capacity and efficiency, not necessarily for speed. It’s built extra wide to carry up to 1,400 passengers, and extra tall to allow any cars under seven feet to travel underneath, whether the bus is in motion or not. This is important because, as a public transport vehicle, the bus would stop and start frequently to load and unload passengers. And, with a top speed of 40 miles per hour, restless drivers would undoubtedly want to pass through.

Of course, the big problem is drivers’ visual perception of a bus’ movement against theirs. How exactly would you not be terrified of a colossal, floating machine rushing past and over you?

How about the drivers around you? How about all of you together at the same time? Crashes, minor and major, are virtually guaranteed upon initial launch, but it appears that only relative cost in fiat money is the true barrier.

It’s not the first time this idea has surfaced, either. Architects Craig Hodgetts and Lester Walker proposed something similar for New York City in 1969, according to CityLab. Their solution—called the Bos-Wash Landliner—would have relied on a complex system of fans to complete its friction-free run between Washington, D.C., and Boston. Hodgetts and Walker explained more detail in New York magazine:

The Bos-Wash Landliner, bound for Boston, streaking through the 86th street reservoir area of Central Park … just about to drop off and pick up busloads of commuters before it resumes full speed of 200 miles an hour. It rides on nearly friction-free air cushion bearings (those plates which you see hugging the sides of the road are something like vacuum cleaners in reverse; the horses connecting them to the turbine-powered, ducted fan-jets above are filled with air). The fan-jets themselves have a regenerator cycle, which means no hot exhaust—important since the Landliner will be zooming only 16 feet over your head if you are driving along the freeway.

If the safety tests are up to snuff, the straddling bus seems like an excellent idea, given China’s infamous history with highway and city traffic—including the China National Highway 110 jam, where some drivers reported being stuck for five days.

The longest traffic jam ever recorded was in Beijing, China and lasted 12 days. Wow!
What would you have done? RT pic.twitter.com/CY64Cb5CPD

And China has the pollution thing down pat, as well.

Reported by Vox, the Chinese are working both ends of the problem, hoping to utilize the oft-theorized coal-to-gas (CTG) idea into a feasible reality. Wrote Brad Plumer:

The idea of transforming coal into gas has been around for decades. If you take coal and run it through a gasification process—carefully applying heat and limiting the oxygen so that the hydrocarbons break apart chemically rather than burn—you can create a type of ‘syngas’ that produces fewer pollutants when burned for power …
One drawback is that it’s rather expensive to do so. During the oil crisis of the 1970s, the Department of Energy heavily subsidized various CTG technologies in the United States. But only one large plant ever got built in North Dakota before the concept was largely abandoned.

But, you know, there’s a potential drawback—because there’s always a drawback. Wrote Plumer, “The danger here is that CTG plants are extremely energy-intensive, and they can be even worse for global warming than coal alone. They’re also much worse than using natural gas that’s drilled out of the ground.”

A Duke analysis published in 2013 stated that making synthetic natural gas for China’s electricity needs would yield substantially more greenhouse gases than coal-burning—between 36 and 82 percent more, in fact. And “creating liquid transportation fuels from coal, meanwhile, could be twice as CO2-intensive as using gasoline,” Vox reports.

Maybe the straddling bus will solve all those problems. Or, at worst, we’ll get true-to-life memes, like this one:

My grandpa during this traffic jam: "The best part about China? No Obama. The worst part? THE GODDAMN SPACESHIPS!" https://t.co/qnqpWYXCqk

Editor’s note: Portions of this article in its original form copied reports from CityLab and Vox without attribution. This article has been updated accordingly. We regret the oversight.