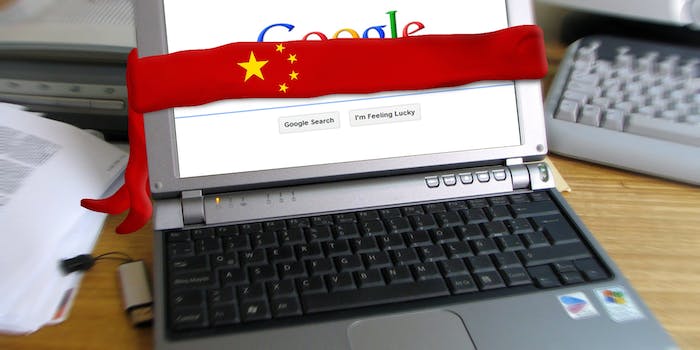 Google blocked in China ahead of Tiananmen massacre anniversary

Thou shalt not search "Tiananmen."

China is reportedly blocking Google ahead of the 25th anniversary of the Tiananmen Square massacre.

Obstruction of Google services are believed to be part of a massive government effort to stifle conversation around the Tiananmen Square massacre which occurred on June 3 and 4, 1989, during which at least several hundred protesters were killed by the Chinese military.

The so-called “Incident”—launched in part to protest inflation, limited career prospects, and govenrment corruption—has since been disguised as a “counterrevolutionary riot” by the Chinese government, and hidden from new generations of Chinese.

Maya Wang, a research at Human Rights Watch in Hong Kong, told the New York Times that China’s government was cracking down on potential dissent more strongly this year.

“The response has been harsher and more intense than we’ve ever seen,” said Wang.

Political activists and rights advocates have reportedly been detained or placed under house arrest. And a factory worker was arrested for posting a photo of himself doing the victory ‘V’ sign at Tiananmen Square, thought to be a sign of subversion.

A writer at Chinese blog GreatFire.org called this the “strictest censorship” ever employed against Google. Any comments relating to Google’s poor service have allegedly been deleted.

Possibly to deflect allegations of censorship, the Chinese government have allegedly only partially interrupted Google services in the hopes that Google will be blamed for the disruption. Google told theTimes there was no such problem at their end.

Curiously, Bing’s service in China has apparently not been affected.